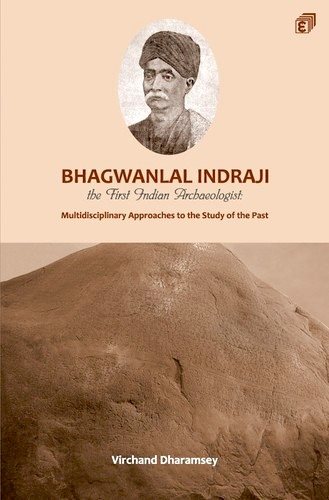 A third kind of sidelined scholarship is introduced to us by Virchand Dharamsey’s book Bhagwanlal Indraji —The First Indian Archaeologist (2012). This connects up with mainstream scholarship that is largely English-speaking and which is usually uncomfortable with the Indian languages in which people from small towns and places publish. The subject of the book, Bhagwanlal Indraji, was born in Junagadh in a family of Ayurvedic practitioners. As a 15-year-old, he became seriously interested in ancient inscriptions when the newly-opened Sanskrit pathshala there was presented a chart of characters of the Brahmi script which James Prinsep had deciphered and published. Using a tracing of that chart, he began to study the inscribed rock of Girnar and some years later, he became a masterful decipherer of epigraphs. Initially, Bhagwanlal acted as an assistant to the doctor-cum-Indologist Bhau Daji who extensively used his findings. It was after his benefactor’s death that he came into his own, received credit for his work and a honorary doctorate from Leiden University. This is well-known.

What this book has now revealed is that sometimes, Bhagwanlal’s discoveries were ahead of his European contemporaries but remained sidelined because they were written in Gujarati. The handwritten notebooks of Bhagwanlal in the library of the Forbes Gujarati Sabha in Mumbai highlight this as do the letters which Bhagwanlal wrote to his patron, the Nawab of Junagadh, about the progress of his archaeological explorations. These, unlike the diaries, were published in Saurashtra Darpan, a Gujarati weekly from Junagadh, but, like the diaries, are in Gujarati.
In a letter written in 1872, he reported his discovery of an Ashokan edict at Bairat in Rajasthan: “On the southern side of Virat is a hillock with ancient Buddhist ruins. Near the ruins once stood an engraved stone inscription of Ashoka, which at present lies in the Asiatic Society Museum in Calcutta. While I was on the northern side of Virat, I discovered a new inscription at the foothill.” Since his letter was published in Saurashtra Darpan and in Gujarati, he never got the credit for it and instead, an assistant of Cunningham who arrived there soon after, came to be considered as its discoverer.

Thanks to Dharamsey’s archival digging, many vignettes about the remarkable life of this pioneering Indian archaeologist have come to light. And it all started for Dharamsey when he browsed through the manuscripts catalogue of the library of the Forbes Gujarati Sabha. One can only hope that the newly-launched National Mission on Libraries will pay attention to the holdings of such institutions so that there is an integration of those outside the academy with those within it. Hopefully, this will make it easier for many more individuals like Bhagwanlal’s biographer to find such forgotten scholarship.