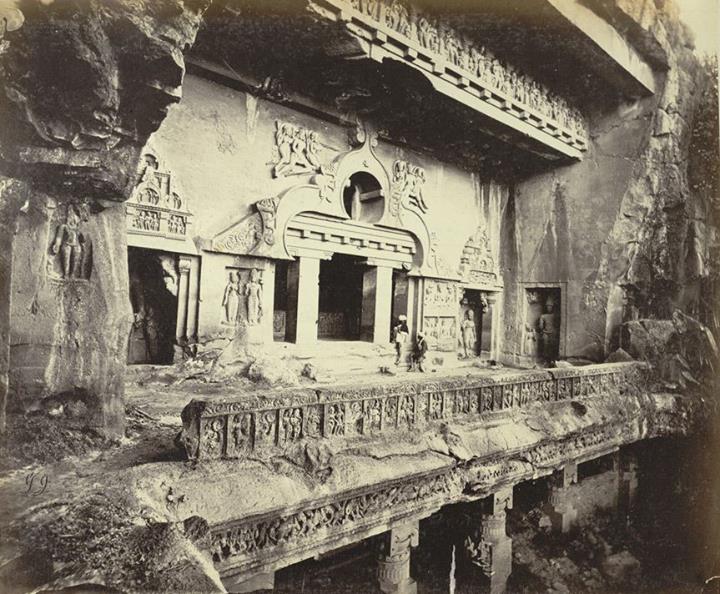 Digital Rare Book:
Report on the Elura cave temples and the Brahmanical and Jaina caves in western India; completing the results of the fifth, sixth, and seventh seasons' operations of the Archaeological survey, 1877-78, 1878-79, 1879-80. Supplementary to the volume on "The cave temples of India."
By James Burgess
Published by Trubner & Co., London - 1883

Photograph of the Vishvakarma cave at Ellora from the 'Lee-Warner Collection: 'Bombay Presidency. William Lee Warner C.S.' taken by J. Johnston in the 1870s. The site of Ellora is famous for its spectacular series of Hindu, Buddhist and Jain cave temples excavated into the rocky façade of a basalt cliff. The works were carried out under the patronage of the Kalachuri, the Chalukya and the Rashtrakuta dynasties between the sixth and the ninth centuries. The cave known as Vishvakarma is named after the architect to the gods, dates from the seventh century and is one of the last rock-cut Buddhist Chaityas in Western India. This view shows the upper part of the entrance to the cave. This gallery has a doorway in the centre that is flanked by celestial figures and niches capped with pyramidal motifs.