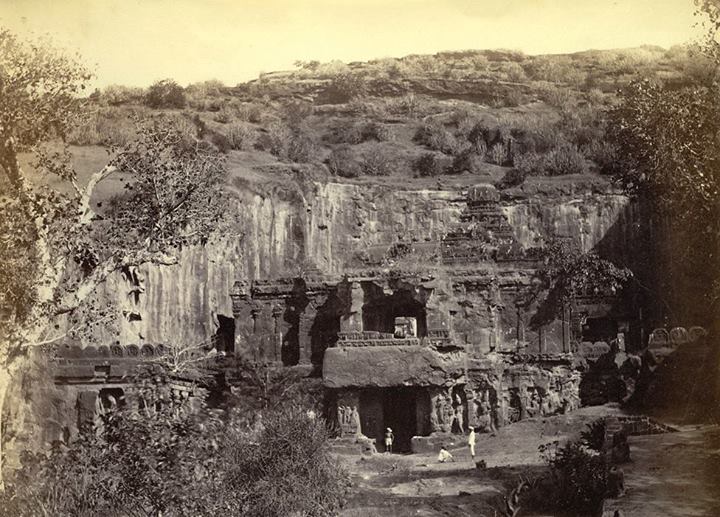 Photograph of the entrance to the Kailasanatha temple at Ellora, part of the Allardyce Collection: Album of views and portraits in Berar and Hyderabad, taken by J. Johnston in the 1860s. The site of Ellora has a spectacular series of Hindu, Buddhist and Jain cave temples excavated into the rocky façade of a cliff of basalt. The works were carried out under the patronage of the Kalachuri, the Chalukya and the Rashtrakuta dynasties between the 6th and the 9th Centuries. The Kailasa temple, seen in this view, is the most noted of all the splendours of Ellora, a free-standing temple rather than a cave, entirely sculpted out of a great mass of basalt. Patronized by a succession of rulers from the Rashtrakuta dynasty, mid-8th century, it symbolizes Mount Kailasa, the abode of Shiva. River goddesses mark the route to the three sections of the temple (a Nandi shrine, a gatehouse and the main sanctuary) which are on a raised plinth borne by elephants. The principal shrine is topped by a pyramidal tower (shikara). Superb sculptural friezes in the temple tell tales from the Ramayana, the Mahabharata, and of Shiva. Two monolithic obelisks are situated on the side of the main temple. They are sixteen metres high and decorated with relief carvings.

The politco - administrators were Rastrakutas in India

Visited this Ancient Temple in 2006 december. Wonderfully renovated without spoiling the original flavour. The colour is earthy yellowish brown. Carved out of a single basalt rock. It is awesome.