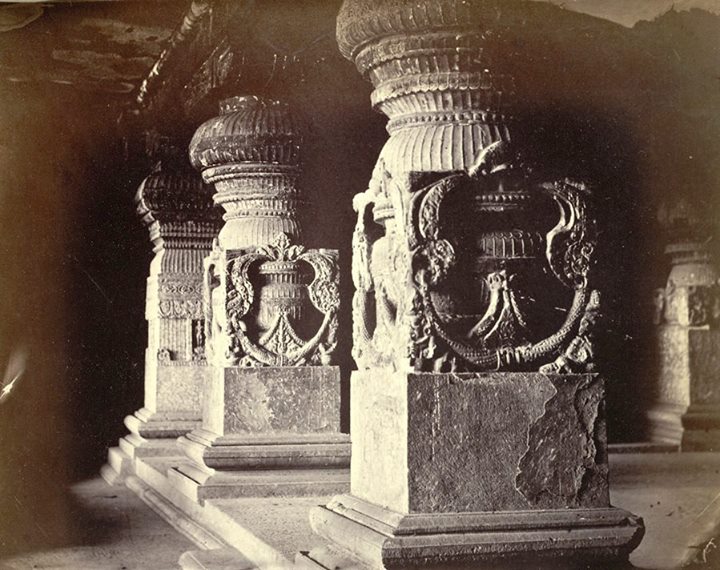 Photograph of the pillars inside the Indra Sabha cave at Ellora, part of the Allardyce Collection: Album of views and portraits in Berar and Hyderabad, taken by J. Johnston in the 1860s. The site of Ellora has a spectacular series of Hindu, Buddhist and Jain cave temples excavated into the rocky façade of a cliff of basalt. The works were carried out under the patronage of the Kalachuri, the Chalukya and the Rashtrakuta dynasties between the 6th and the 9th Centuries. Indra Sabha is the largest of the Jain series and dates from the 9th century, Rashtrakuta patronage. A simple gateway leads to a courtyard in which there is a monolithic shrine with a pyramidal roof. The cave is double-storey and is excavated in the rear of the courtyard. The interior of the cave has a mandapa (columned hall) with niches on three sides and the sanctuary in the middle of the back wall. Carved figures of the Jain Tirthankharas decorate the walls. Elaborate foliate and garland motifs are carved on the shafts of the columns.

WHAT A BEAUTY . THE SPIRIT OF THE TIME IS STILL OOZING .