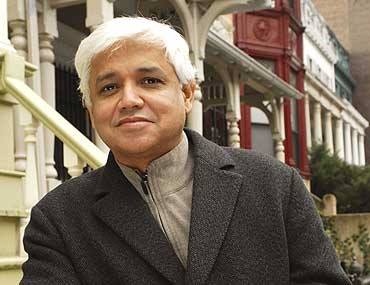 INTERVIEW with Amitav Ghosh:
'The Ghazipur and Patna Opium Factories together produced the wealth of Britain'.

Q. You also did research about the opium trade?

The bulk of the opium came from Bengal and Bihar, and no book has been written on it. I had to spend a lot of time in archives digging up original sources, finding letters and journals of opium traders. My description of the Ghazipur opium factory came from a chance discovery in the British Museum of a book written by the guy who was the head of the Ghazipur factory, a Scotsman. He wrote a book about it describing it in excruciating detail to serve as a tourist guide to the opium factory. The Ghazipur and Patna opium factories between them produced the wealth of Britain. It is astonishing to think of it but the Empire was really founded on opium.

Q. Most of your novels are triggered by some fragment of family history. Is this one too?

In a way it is. I was told by my father that my ancestors left East Bengal in 1656, and after much wandering they settled in Chhapra in Bihar and remained there for the next 150 years. My father grew up speaking Bhojpuri. Then it struck me that if we moved to Chhapra in 1856, what would have been the attraction? Clearly, the major economic activity in that region at that moment was opium.

Q. Why did you start working now on this particular idea?

I think we have such a distorted idea of our history of the 19th century in some ways. When you actually look at the past, it was so different. From writers like Naipaul and so on, we had a picture of what it was like for the Indian migrants after they arrived in places like Mauritius. But for me what was so hard to imagine, so incredibly poignant, was the moment of departure. What did it mean for them? They were farmers, the most rooted people. The courage it took at that time for a Bihari to set out across the kala pani is something you and I can barely conceive of. I felt so moved by that, such admiration for them in a way that I wanted to write about it. I wanted to think about it in detail, what was it really like, the actual moment of departure when you see everything you know disappearing behind you.

that's what the USA seems to be trying with marijuana.

Pavanhari baba is from this place. Gazipur. He is guru of Vivekananda, after demise of st.Ramakrishna

Rina Sen Gupta, this is the first...read the interview with A Ghosh and then see the art work, amazing!