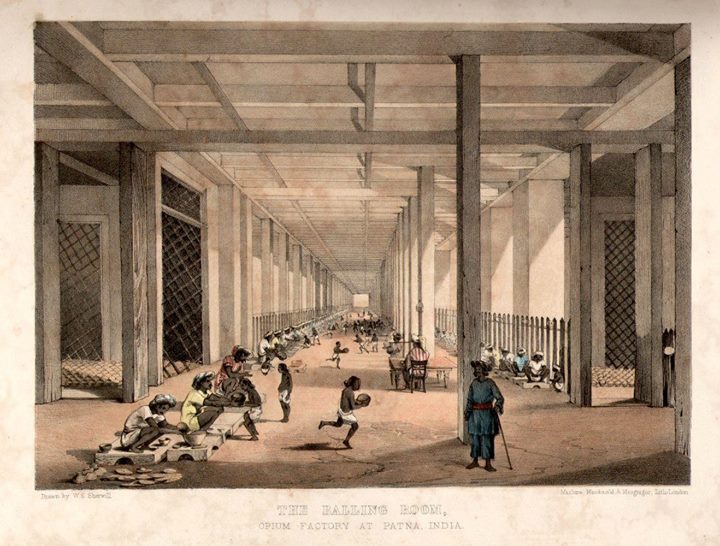 ON the banks of the Ganges, forty miles below Benares as the crow flies, stands the Ghazipur Factory, an opium mint as it were, whence issue the precious cakes that are to replenish the coffers of the Indian Government. The busy season is setting in, for with April the opium comes up from the districts after having run the gauntlet of the district officers of the Opium Department, who will pass it as fit for use. Then the really serious work opens, under a roasting sun. The opium arrives by challans, regiments of one hundred jars, each holding one maund, and each packed in a basket and sealed atop. The district officer submits forms — never was such a place for forms as the Ghazipur Factory — showing the quality and weight of each pot, and with the jars comes a person responsible for the safe carriage of the string, their delivery, and their virginity. If any pots are broken or tampered with, an unfortunate individual called the import-officer, and appointed to work like a horse from dawn till dewy eve, must examine the man in charge of the challan and reduce his statement to writing. Fancy getting any native to explain how a jar has been smashed! But the Perfect Flower is about as valuable as silver.

Background:
Kipling probably visited this opium factory in January 1888, on his rail journey from Allahabad to Calcutta, shortly before the start of the spring opium production season. Andrew Lycett notes in his biography Rudyard Kipling, Chapter VII, 'Allahabad and Home (1887-1889)' on page 208 of the Phoenix paperback, that Kipling visited Harry Rivett-Carnac here. He was an old friend of the Kipling family, and had secured the position of Opium Agent at Ghazipur on a salary of 3,000 rupees a month, equivalent to £2,700 per annum then, and five times as much as Kipling was earning at the time. This reflected the highly profitable nature of the trade.

Kipling had himself used opium, both as a recreational drug and a medicine. See Andrew Lycett, pp. 96-7. See also "The Gate of the Hundred Sorrows" in Plain Tales from the Hills. The visit to Calcutta is described in “The City of Dreadful Night”, also in this volume 2 of From Sea to Sea. See the Introduction in this Guide to these volumes for more information about his journey, also the Map of 'Kipling's India', and the 1902 Map of North East India.
- Source: www.kiplingsociety.co.uk

“From the mixing room the crude opium is conveyed to the Balling Room, where it is made into balls. Each ball-maker is furnished with a small table, a stool, and a brass cup to shape the ball in a certain quantity of opium and water called 'Lewa,' and an allowance of poppy petals, in which the opium balls are rolled. Every man is required to make a certain number of balls, all weighing alike. An expert workman will turn out upwards of a hundred balls a day.”
- The Truth about Opium Smoking, 1882

Illustrations of the mode of preparing the Indian opium intended for the Chinese market from drawings by Captain Walter S. Sherwill.

This is how England became rich, according to Amitava Ghosh

Ghosh is writer of historical fiction...