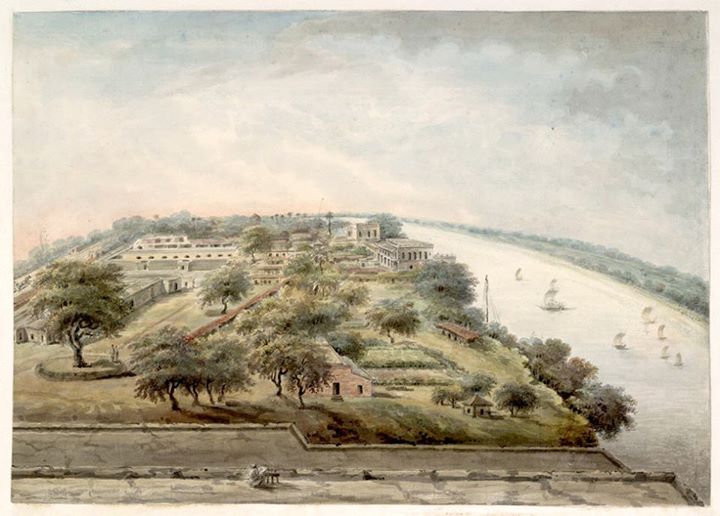 Image:
Watercolour of a bird's eye view from an Opium Godown at Patna from 'Views by Seeta Ram from Patna to Benares Vol. II' was produced for the Lord Moira, afterwards the Marquess of Hastings, by Sita Ram between 1814-15. Marquess of Hastings, the Governor-General of Bengal and the Commander-in-Chief (r. 1813-23), was accompanied by artist Sita Ram (flourished c.1810-22) to illustrate his journey from Calcutta to Delhi between 1814-15.

The British used Patna as a centre for manufacturing opium for exportation and medicinal purposes. The godown or store was located on the river bank and on the site of an old Dutch Factory. This is a bird's eye view from above the Opium Godown at Patna, showing the houses and their grounds to the west, with the Ganges on the right. Sitaram depicts himself sketching on the flat roof of the godown and shows the curve of the earth in the distant prospect. Inscribed below: 'Bird's Eye.- view from the Top of the Opium Godown across the River Ganges and Hazypore at a distance.'

This is a lovely series. Possibly this essay might also add to it. http://wesscholar.wesleyan.edu/cgi/viewcontent.cgi?article=1953&context=etd_hon_theses

Opium trade set up the base for a form of capitalism which we see rampant today. Only Opium has changed to a variety of daily 'fixes'. From emotional fix of media to the physical fix of food to the cummulative fix of internet. And everybody wants to be the kingpin of dependency. This explains why FB paid what it did for Watsapp. It paid the premium for the dependency it brought along.

Thank you. I could go on about it. But three seminal ideas which have steered the world, and not necessarily for greater harmony, are Roman hierarchical organization, the industrial revolution and the opium trade. This has boiled down to a very debilitating concoction of systems which now rule and govern most of our everyday life.

Avi Das: The debilitating "concoction" you talk about has made this world of ours the richest and most prosperous that it has ever been in human history. But for roman law, the latin language, english "industrial revolution" and other things that have contributed to this "concoction", we wouldn't be here discussing online 19th century opium trade

Strangely if you go to the Caribbean you will be told it was slavery and the sugar trade that made Britain rich...