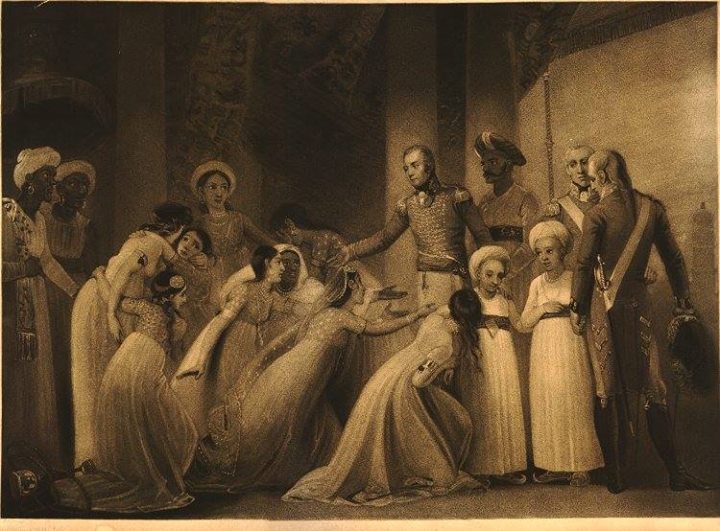 The Surrender of the Children of Tippoo Sultaun

In Tipu Sultan's palace, Major Allen, standing in centre to left, addressing a group of pleading Indian women, as the Sultan's two sons, standing to right, are taken hostage; after Stothard; proof before letters.

1800
Mezzotint
After: Thomas Stothard
Print made by: Charles Turner

As you sow so shall you reap - Serves him right for forcefully converting 3000 Brahmins - Malayali Muslims, now living a life of conceit and many uneducated.

@ Vikram Chauhan: This is a painting by a British artist depicting the surrender ceremony of Tipu's sons in his palace as hostage insurance, part of the treaty terms following his loss in the third Anglo-Mysore war at the hands of allied forces of East India Company, Nizam of Hyderabad and Marathas. Hope it helps to understand the situation in the painting. It is an art work. Further, it is not about many Indians not being able to stop three British here.

@ Ajoy Majumdar: Unfortunately, history has never been in the side of the weak. Wodeyars were not strong enough to resist Hyder Ali or Tipu Sultan. Of all, company had least interest in the forced circumcision of Nairs of Malabar. Nairs sided with the British against Mysore in their interest. On the contrary, there was little to no consequence for the Portuguese for their inquisition of Konkan.

Its heart touching. But to raghu bhat on his comment wodeyers whr the best administrators they paid the taxes on behalf of people, wodeyers went for peace and harmony. A long future agenda. Nothing in mysore is lost.

Right....but how is that relevant to my comment? I hope you didn't mean that Wodeyar offered power to Hyder Ali in the interest of long term peace and harmony!

Are there any accounts of this written by Indians.