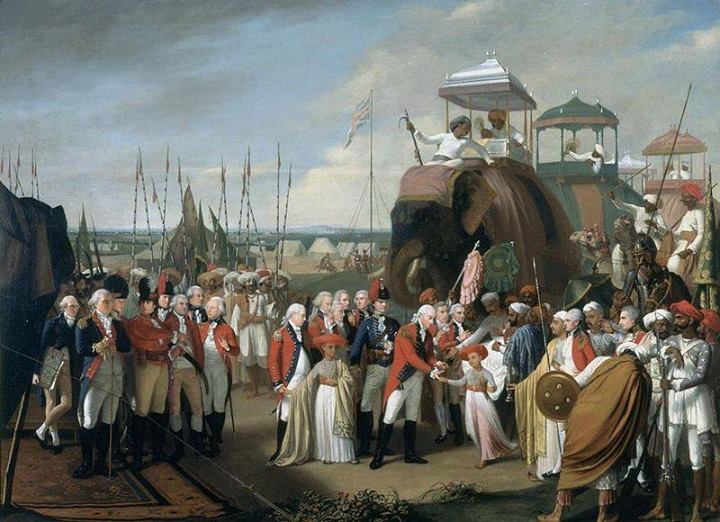 Article:
A Portrait into the Past: ‘The reception of the Mysorean hostage princes by Marquis Cornwallis’, Robert Home (1793-1794).

Robert Home was born in Hull, the son of an army surgeon from Greenlaw in Berwickshire. A professional artist, he had trained under Angelica Kauffman, and worked in Italy (1773-78) and Dublin (1783-89) before leaving for India in 1790 as official war artist to Lord Cornwallis in the Third Mysore War. He arrived in Madras in January 1791, at the same time as Cornwallis, the successor to General Medows as Governal General. On 5th February, the Grand Army moved towards Bangalore, and Home was permitted to follow them.

After the Treaty of 1792, Robert Home painted the splendid ‘Lord Cornwallis Receiving Tipu Sahib’s Sons as Hostages at Seringapatam, 1793-94, which has remained one of the icons of the Mysore Wars. I will now use this painting which is at the National Army Museum in Chelsea, London to tell you more about Tipu Sultan, his people and the court around him.

Major Dirom, who also served in the 3rd Mysore War, published his comprehensive ‘Narrative’ of the campaign in 1793. In it, he describes this momentous event in vivid detail—-’On the 26th about noon, the Princes left the fort, which appeared to be manned as they went out, and every where crouded (sic) with people, who, from curiosity or affection, had come to see them depart. The Sultan himself, was on the rampart above the gateway. They were saluted by the fort on leaving it, and with twenty-one guns from the park as they approached our camp, where the part of the line they passed, was turned out to receive them. The vakeels conducted them to the tents which had been sent from the fort for their accommodation, and pitched near the mosque redoubt, where they were met by Sir John Kennaway, the Mahratta and Nizam’s vakeels, and from thence accompanied by them to head quarters.’

In the days preceding this event Tipu had fought with himself into agreeing to the surrender terms of the British. Having no other option after being hemmed in by the grand army of the British, Nizam and the Marathas he would have watched in desperation as his children were led out of the fort as hostages to the British. Dirom writes of two separate gun salutes in honor of the Princes, one from Tipu’s battery in the fort and the other from the British encampment in Ganjam, the Cypress garden where Tipu’s father, Hyder Ali lay buried. They were provided with a guard of honour inside the British lines and were conducted by their vakeels.

Thanks to Shashi Kolar for providing the link to this most fascinating blog.

Thanks to Indu MG for providing this painting of Robert Home.

Why is Tipu Sultan referred to as Tipu in a condescending/derogatory way? Cornwallis is 'Lord'!!!! But Indian rulers, are referred to by first names by colonialists.

So touching...the epic struggle of one.man against so many adversaries

can anyone read this hand written book it is in persian i want to know the subject , cover page is damaged it has 300 pagesi can sen you some more pages if needed