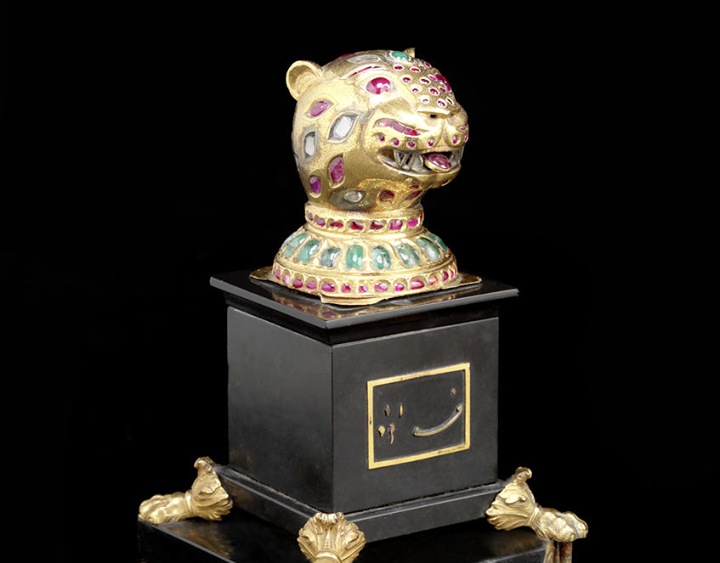 Image:
An important gem-set gold Finial in the form of a Tiger's Head from the throne of Tipu Sultan (1750-99)
Mysore (Seringapatam), made between 1787-9.

Gold sheet over a natural resin core, set with rubies, diamonds and emeralds. The collar around the base with three bands of gems: at the bottom an arcaded band set with foiled, polished cabochon rubies; above a band of foiled polished cabochon emeralds, the settings overlapping the stones and with small cusped claws extending onto the surface of the emeralds; and above a further band of foiled, polished cabochon rubies. The main gold surface of the head worked with a punch to create a stippled surface; symmetrically set on either side of the centre line with foiled table-cut diamonds, foiled cabochon rubies and foiled cabochon emeralds of varying sizes, with larger rubies set on the eyes and the tongue, the teeth set with foiled table-cut diamonds. The ears projecting above the head decorated with engraved lines and punchwork. The head mounted on a black marble pedestal with four gilt-metal claw and ball feet and a partial appliqué inscription in gilt metal the head 6.9 cm. high and 338 g.; total height with pedestal 17.5 cm.

Lord Wallace was a prominent English politician in the late 18th and early 19th Century. He became an MP in 1790; in 1800 he was created Commissioner for the Affairs of India and in 1801 was appointed a Privy Councillor; he served as President of the Board of Control between 1807 and 1816, in which position he oversaw the East India Company; he was made a peer in 1818 and served as Vice President of the Board of Trade from 1818-23. In 1828 he was ennobled as Baron Wallace.

Was this sold by Bonhams?