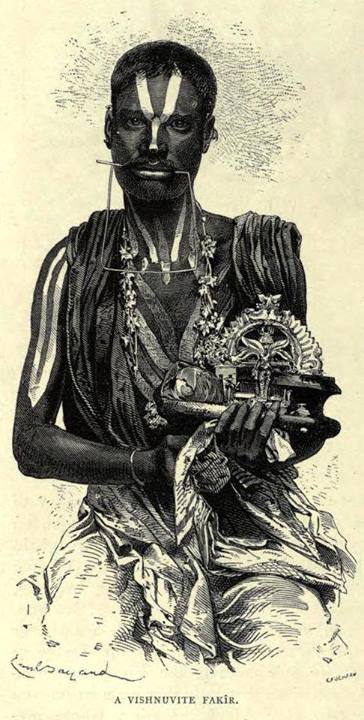 Illustration from the book:

hv seen this amongst the Shaivites and Devi worshippers today.. Is there any Vaishnavite group that does the self-mutilation thing? Meera Iyer Kurush F Dalal Durga Kale Swaminathan Natarajan

I have seen a march by a few hundred people who pierced their cheeks with bars used at construction sites in Bombay not long ago. On equiry, I was told that most of them were the residents of the dirtiest and shantiest pavement dwellings in the city in and around the Reay Road bridge. Self mutilation and infliction of pain is seen in may religions around the world (including Christianity) and is not confined to pantheistic religions of India. Religions are also known for inflicting pain on others. At a deeper psychological level, self pain is inflicted with a sense of deep guilt to wash away sins or wrongs committed. I have read reports where people pierce their genitals too. Tattoos and rings are the simplest versions of such practices.

its the 1st time am seeing vaishnavism associated with self mutilation- am wondering if its an artistic licence. Kalpan Haridas Vaishali Welankar

I have seen this type of piercing done without bloodshed or expression of pain in a Baayi Beega ritual in a village in Mandya district among Vokkaligas and other castes who are Shaivites, its is mostly women who take a vow to have the Baayi beega pierced and the baayi beega is fixed by the "priest" primarily who have taken the vow, for the health of their family members. The man who performs this ritual doesn't put a lock on his own face-he however goes on a fast the whole day. He is not from the Brahman or Lingayat caste-he is a vokkaliga.

Lathashree Kolla This is a Vaishnav Dasari, a community formed by people who act as servants to lord Vishnu/ Tirupati as a vow taken either by them or their relatives. since it is a class, the dasaris belong to various castes and serve as mendicants or priests for the people from various castes..some dasaris are known to accompany people on pilgrimage to various Shaiva and Vaishnava places to fulfill their vow...sometimes the people who take the vow and the Dasari who accompanies them pierce their cheeks with silver skewers and the mouth lock in front...check https://www.google.co.in/url?sa=t&rct=j&q=&esrc=s&source=web&cd=16&cad=rja&ved=0CDIQFjAFOAo&url=http%3A%2F%2Fitex.coastal.cheswick.com%2Freport%2Fpg%2F42992%2Fsrc%2FiPad%2Fhuge%2Fp%2Fipad-ph.pdf&ei=GKz5UtWECI2MrAeMn4CQCQ&usg=AFQjCNE_ID36m87NQ5KjgvSp_jMT96p10g and http://www.britishmuseum.org/research/collection_online/collection_object_details/collection_image_gallery.aspx?partid=1&assetid=418733&objectid=3058328

Thank you so much Vaishali Welankar