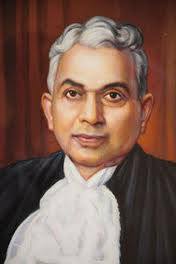 B.N.Rau prepared the draft Constitution consisting of 243 articles and the Drafting Committee worked over it to expand it to 315 Articles. After the 2473 amendments, the final form of the constitution emerged with 395 Articles.

Dr. Ambedkar appreciates the work of B.N. Rau in his speech:

“The credit that is given to me does not really belong to me. It belongs partly to Sir B. N. Rau, the Constitutional Adviser to the Constituent Assembly who prepared a rough draft of the Constitution for the consideration of the Drafting Committee. A part of the credit must go to the members of the Drafting Committee who, as I have said, have sat for 141 days and without whose ingenuity of devise new formulae and capacity to tolerate and to accommodate different points of view, the task of framing the Constitution could not have come to so successful a conclusion. Much greater, share of the credit must go to Mr. S. N. Mukherjee, the Chief Draftsman of the Constitution. His ability to put the most intricate proposals in the simplest and clearest legal form can rarely be equalled, nor his capacity for hard work.”

Not even that, the President of the Constituent Assembly, Dr. Rajendra Prasad himself admired B.N. Rau on the day of signing Constitution:

“Dr. Ambedkar mentioned the names of these Committees. Several of these had as their Chairman either Pandit Jawaharlal Nehru or Sardar Patel to whom thus goes the credit for the fundamentals of our Constitution. I have only to add that they all worked in a business-like manner and produced reports which were considered by the Assembly and their recommendations were adopted as the basis on which the draft of the Constitution had to be prepared. This was done by Mr. B.N. Rau, who brought to bear on his task a detailed knowledge of Constitutions of other countries and an extensive knowledge of the conditions of this country as well as his own administrative experience. The Assembly then appointed the Drafting Committee which worked on the original draft prepared by Mr. B. N. Rau and produced the Draft Constitution which was considered by the Assembly at great length at the second reading stage.”

Dr. Ambedkar even went on to explain that he did not deserve that much credit for the making of the Constitution, and even paid hid gratefulness to the members for extending him the Chairmanship of the drafting Committee:

Nice fact ! Then what about the role BR ambedkar being drafting committee head !