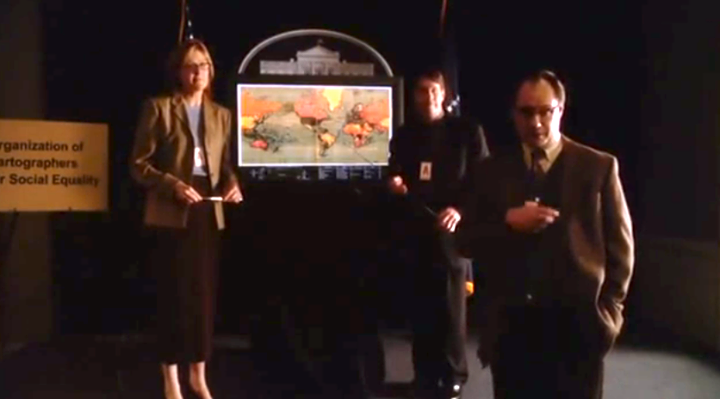 Video:
In 1973, the left-wing German historian Arno Peters unveiled an alternative to Mercator's allegedly Eurocentric projection: a world map depicting countries and continents according to their actual surface area—hence the smaller-than-expected northern continents, and Africa and South America appearing, in Jerry Brotton's words, "like long, distended tear drops." The 'equal area' projection, which was nearly identical to an earlier design by the Scottish clergyman James Gall, was a hit with the press and progressive NGOs. But critics argued that any projection of a spherical surface onto a plane surface involves distortions, and that Peters had amplified these by committing serious mathematical errors. "No map is any better or worse than any other map," Brotton says. "It's just about what agenda it pursues."

The West Wing enshrined the Peters Projection in pop culture during an episode in which the fictitious Organization of Cartographers for Social Equality lobbies the White House to make it mandatory for public schools to teach Peters's map rather than Mercator's.

- Excerpt from 12 Maps That Changed the World by Uri Friedman.

"Association of Cartographers for Social Equality" turns the world topsy turvy ... brilliant. One can surely play with up and down or upside down to resolve the North-South issues. I had always wondered why "The Largest" island (Australia) appeared smaller than Greenland on the map. Likewise, Great Britain is punier than what it looks like on the map.

..And the size of Africa ( http://www.economist.com/blogs/dailychart/2010/11/cartography )