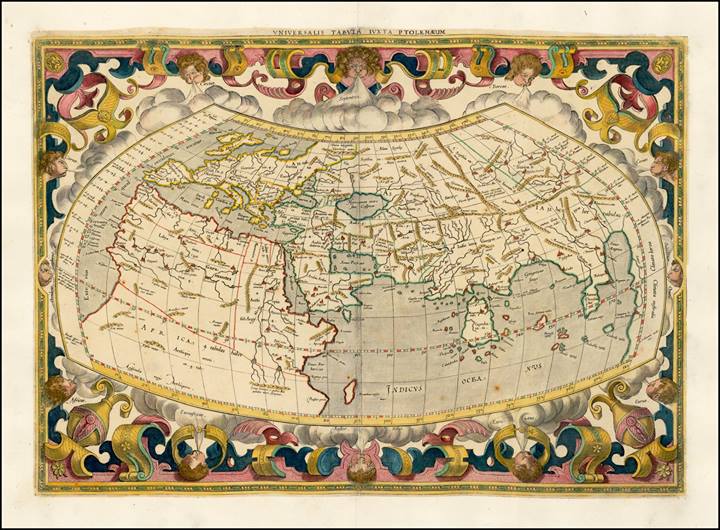 Gorgeous example of Mercator's map of the World, based upon the writings of Claudius Ptolemy, from a later edition of Gerard Mercator's Tabulae geographicae CI. Ptolemaei ad mentem autoris restitutae et emendatae per G. Mercatorem, first published in 1578.

This is the first state of Mercator's1578 Ptolemaic world map, with the strapwork around the map and 12 windheads. In the later editions, the border has been re-engraved, and now includes a frieze of allegorical figures representing the four elements of Fire (Zeus), Air (Hera), Water (Neptune), and Earth (Gaia), rather than the strapwork and windhead border of the earlier editions.

The map includes a massive Taprobana (modern day Sri Lanka) in the Indian Ocean. The Indian subcontinent is severely truncated and the Indian Ocean appears to be land locked. Only the northern part of Africa is shown with the Nile originating in the twin lakes south of the Equator in the Lunae montes (Mountains of the Moon).

While Mercator is perhaps best known for his modern maps and the map projection which bears his name, one of his life goals was to produce his own version of Ptolemy's Geographia. As a second installment of his Atlas sive Cosmographia . . ., Mercator published an authentic version of Ptolemy’s seminal work, deliberately devoid of the distracting interpretations and misinterpretations by earlier editors intent on improving the Egyptian geographer’s seminal work. Mercator’s goal was an accurate portrait of Ptolemy’s second-century view of the world. To understand the present, the mapmaker believed, one must appreciate the past.

The atlas, published in 1578, included Ptolemy’s twenty-seven maps, carefully restored, handsomely engraved, and supplemented by an index of place names and an enlarged boundary map of the Nile Delta. A total of 8 editions were published between 1578 and 1730.