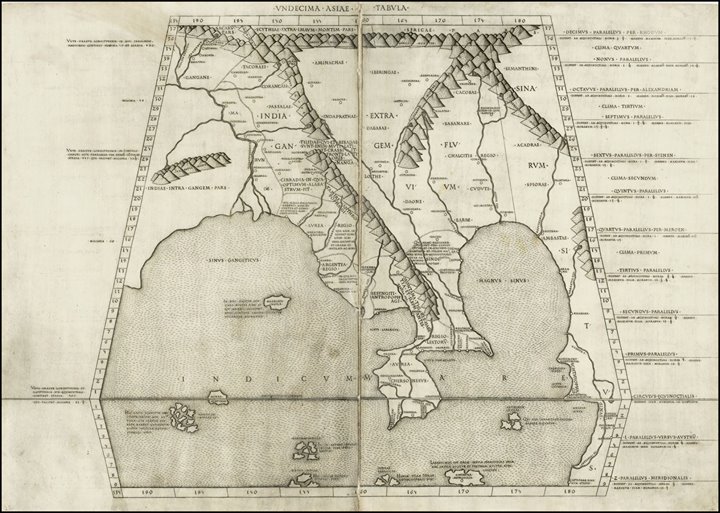 Important early map of the Indian Ocean and Southeast Asia, from the 1478 Rome edition of Ptolemy's Geography, Claudii Ptholomei Alexandrini. Cosmographia..., created under the direction of Conrad Swenheym (who apprenticed with Guttenberg) and pubished after Swenheym's death (1477) by Arnold Buckinck.

The map illustrates one of the greatest of the Ptolemy errors, the belief that a southern continent existed, which counter-balanced the weight of the land-masses in the northern hemisphere, to keep the earth stable on its axis. The present map illustrates a portion of the landlocked Indian Ocean, including much of the Indian Ocean (Indicum Mare), as it had been mapped by Ptolemy. As noted by Suarez:

Various features of Ptolemy's Southeast Asia can be seen in the copperplate rendering prepared for the Rome edition of 1478 . . .After crossing east of the Ganges (whose Delta is on the left), we enter Aurea region, a kingdom of gold, which is roughly located where Burma begins today. Above it lies Cirradia, from where, Ptolemy tells us, comes the finest cinnamon. Further down the coast one comes to Argentea Regio, a kindgom of silver, "in which there is sadid to be much well-guarded metal." Besyngiti, which is also said to have much gold, is situated close by. The region's inhabitants are reported to be "white, short, with flat noses." Here the Temala River, because of its position and becuse it empties through a southerly elbow of land, appears to be the Irrawaddy. If so, the Sinus Sabaricus would be the Gulf of Martaban, whose eastern shores begin the Malay Peninsula, and the Sinus Permimulicus would be the Gulf of Siam.

That active commerce was conducted between Malaya and points west during the period in which the Geographia was compiled is suggested by the Geographia's reference to the Indian port of Alosygni (probably in the Dodvari Delta) as a "place of embarkation for those who sail for the Golden Chersonense" The Golden Chersonese is generally accepted to be Malaya, which Ptolemy considered and important place . . .

[The Golden Cheronesus] may in factg be Sumatra, portrayed here without the strait that separates it from Malaya. If this is so, it would explain both the shape of the Malay Peninsula and also its extension into the Southern Hemisphere. During the Renaissance, this observation led some scholars (including Abraham Ortelius) to argue that Malaya and Sumatra were once joined in some earlier geological age, rather than conclude that Ptolemy was simply unaware of te Malacca Strait. . . .

Many ofthe coastal cities in Ptolemy's Southeast Asia are marked as "emporiums." Thsed include the ports of Baracura, Barabonna, and Bsyga,in the region of what would now be Burma. Further along the Malay Peninsula one comes to the Emporium of Tacola, with Sabana at the southernmost tip, in the position of modern day Singapore. Scholars have tried to identify these places, but there is no convincing consensus. The Sinus Perimulicus is probably the Gulf of Siam (if not the Sinus Magnus), with Regio Lestoru being lower Siam and Cambodia. A spine of mountains running north from there, in what is now northern Thailand and Burma, is according to Ptolemy, a "habitat of tigers and elephants," as well as "lions and robbers and wild men who live in caves, having skins like the Hippopotamus, who are able to hurl darts with ease."

In the waters west of the peninsula, in the relative position of the Nicobar Islands, we find Bazacata Insula, where there "are many shellfish, and the inhabitants of the isalnd," who are called Agmatae, "are said at all timesto go without clothing." In 673 A.D. the Chinese pilgrim I-Ching . . . reached wha he called the "Kingdom of the Naked People," which has been identified as the Nicobars . . .

In the mid-sixteenth century, Gerard Mercator wrongly determined that Bazacatga was actually the Philippine island of Palawan. This was a logical conclusion for Mercator, because he mistakenly believed Taprobana to be Sumatra (rather than Ceylon). . . .

The present map is an excellent example of Conrad Swenheym's engraving style. As noted by Rodney Shirley:

The new copper plates engraved at Rome for the 1478 edition of Ptolemy's 'Geography' are much superior in clarity and craftsmanship to those of the Bologna edition. There is evidence that work on the Rome edition had been started in 1473 or 1474, and several of the plates may well have been engraved before those printed [by Taddeo Crivelli] at Bologna in 1477. The printing was carried out by two skilled printers of German origin: Conrad Sweynheym and his successor Arnold Buckinck; the publisher was Domitius Calderinus. Many consider the Rome plates to be the finest Ptolemaic plates produced until Gerard Mercator engraved his classical world atlas of 1578."

Swenheym (and Arnold Pannartz) introduced the printing press to Italy at the height of the Renaissance, having been apprenticed to Guttenberg. Initially, under the enthusiastic patronage of Pope Paul II, Swenheym concentrated on publishing texts, but later turned to producing the first illustrated Cosmographia in the early 1470s, when enthusiasm was not sustained by the Pope's successor, Sixtus IV. The work was ultimately published one year after Swenheym's death in 1477. The plates for the 1478 Rome Ptolem were later purchased by Petrus de Turre in 1490, who published the second edition of the map.

Until the 1477 edition was definitively dated, the 1478 edition was believed to be the first printed atlas. It was printed by Arnoldus Buckinck, and is thought to be the only known book with his imprint. Buckinck complete the work started by Conrad Sweynheym, whose method of using a printing press for the copperplate maps, together with the fine engraving, produced an excellent result. The text was edited by Domitius Calderinus of Verona; he collated various Latin manuscript in the translation by Jacobus Angelus with an ancient Greek Manuscript, which had been amended by Geirgius Gemistus (d. 1450). Calderinus was a careful worker, and his edition had been much admired for the correctness of the text, the fine typography and the brilliant engraving. Christopher Colombus owned a copy of this edition, which he annotated. The run of the edition is not known, but it is considered to be scarce, and is therefore rare and important.

Conrad Swehnheym's 1478 edition of Ptolemy's work is also of tremendous importance as the first set of maps to employ the "punched letter" printing process. As noted by Tony Campbell,

The development of lettering and numeral punches in fifteenth-century Italy, as a semi-mechanical alternative to the engraver's burin, marks a little-known point of contact between the histories of engraving and cartography. One of the unique features of a map is its necessarily dense toponymy, requiring the time-consuming skills of an experienced lettering engraver. Very early in the history of printed maps, indeed during preparation of the first set of maps to be engraved (if not quite the first to be published), punching was devised as a labour-saving alternative.

Conrad Sweynheym does not expressly claim responsibility for inventing punched lettering. But the dedication to the 1478 Rome edition of Ptolemy's Cosmographia (or Geographia), which appeared the year after his death, referred to the three years (i.e. 1474-77) during which, 'calling on the help of mathematicians, he gave instruction in the method of printing [the maps] from copper plates'. On this passage and the evidence of the engraved maps which Arnoldus Buckinck issued after Sweynheym's death, hangs the German-born printer's claim to a technique that would be used fairly widely on Italian maps for the next century or more.

Conrad Swenheym (Mainz), is widely thought to have been present at the birth of printing while an apprentice of Johann Guttenberg. After Mainz was sacked in 1462, Swenheym fled south to Italy and arrived at the Benedictine Monastery of Subiaco, at the suggestion of the great humanist and cartographer Cardinal Nicholas of Cusa. In 1464-5, Swenheyn and Arnold Pannartz introduced the first printing press to Italy. Over the next few years, Pope Paul II was to become so enthusiastic about the new medium that he liquidated scriptoria and commissioned several newly established printers to publish vast quantities of religious and humanist texts. In 1467, Swenheym and Pannartz moved to Rome under the Pope's patronage where they printed over fifty books from their press at the Massimi Palace. Unfortunately, when the pope died in 1471, the new pontiff Sixtus IV disavowed the numerous unpaid orders of his predecessor.

Swenheym and Pannartz elected to refocus there efforts on to creating the first printed illustrated edition of Ptolemy's Cosmographia, By 1474, Swenheym is recorded as having trained "mathematicians" to engrave maps on copper. Unfortunately, he did not survive to see the book's publication, but his contribution to the history of printing and map making places him at the highest level of importance in the evolution of the printed map.