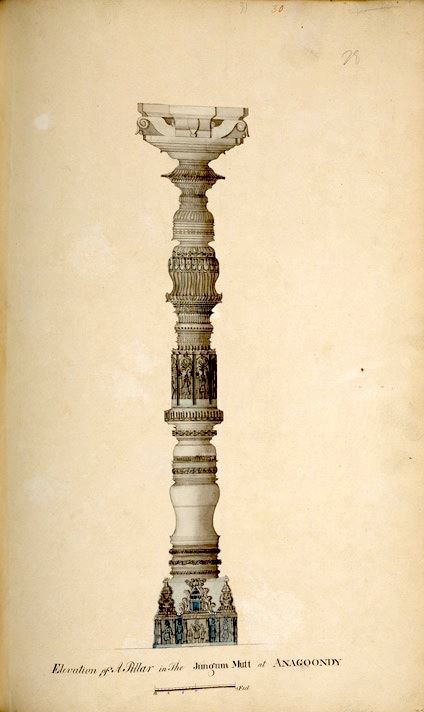 Pen-and-ink and water-colour drawing dated January 1801 of a column from the Uchappaya Matha at Anegondi in Karnataka, from an album of 56 sheets of drawings (60 folios) mainly of miscellaneous architecture and sculpture in the Deccan and S. India. ff.31-38 depict ceiling paintings at Anegundi, dated 1793-1806. Some drawings are by MacKenzie himself, others by his draftsmen, including C. Ignatio.

Anegondi, now a small village situated on the northern bank of the Tungabhadra river, was the first capital (1336-1368) of the Vijayanagara rulers who reigned on the most powerful Hindu empire of South India between the 14th and the 16th centuries. The whole area is imbued with mythological significance. The ancient Kishkindha mentioned in the epic of the Ramayana, ruled by the monkey chiefs Vali and Sugriva, is believed to have been situated at Anegondi. When the Sangama established Vijayanagara as their new capital on the south bank of the Tungabhadra, Anegondi continued to flourish during the Empire Phase (1368-1565 A.D.). After the catastrophic defeat of the Battle of Talikota in 1565, the victorious Muslim army used Anegondi as a base for pillaging the Vijayangara city. Numerous ancient shrines, gateways, walls and the fortifications on the surrounding hills suggest that in the past Anegondi must have been a fortified settlement of considerable importance. The architectural remains at this site date back to the 12th and 13th centuries to the present day. This drawing depicts a composite column with elaborate mouldings from the Uchappaya Matha, a dilapidated two-storeyed structure to the south of the village which is of interest for the fragments of Vijayanagara paintings preserved on the ceiling beams. This structure could have been used as a residence for visitors to the area.

Some columns of the Uchappaya Matha, similar to the one shown above, can be seen in this picture: