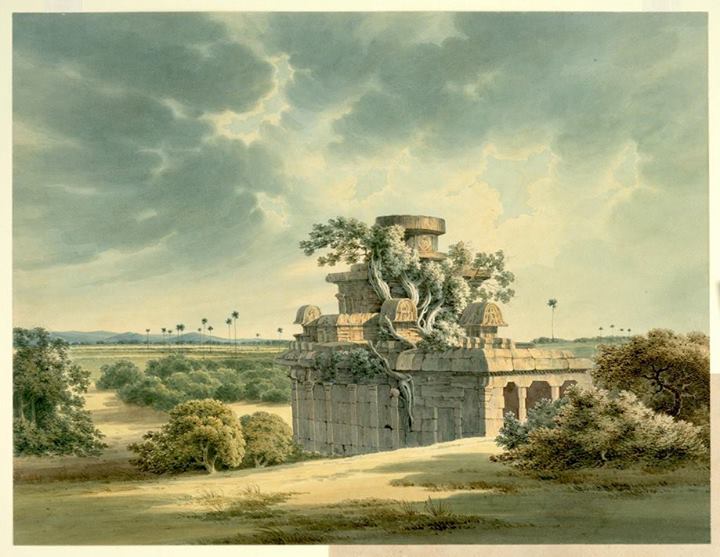 Watercolour drawing of a ruined temple north of Mamallapuram, by John Gantz, c. 1825. From a sketch by Mr J. Braddock.

John Gantz (1772-1853) and his son Justinian ran a lithographic press, but are remembered best for their watercolours of flat-top houses and public buildings in and around Chennai (Madras), dating to the first half of the 19th century. Mamallapuram, a tiny village south of Chennai, was a flourishing port of the Pallava dynasty from the 5th - 8th centuries. The site is famous for a group of temples, a series of rock-cut caves and monolithic sculptures that were most likely created in the 7th century reign of Narasimhavarman Mahamalla. The caves are all fronted with fine columns resting on seated lions, typical of the Pallava style. This drawing depicts a temple in a similar architectural style, with pilastered walls and roofed by a superstructure with small projecting shrines.

you have chosen 2 of the lithos I am using for my book!

any info on mamandur caves? felt a geography!!!!! chang kind of feel between the info in net and the reality!!!!!