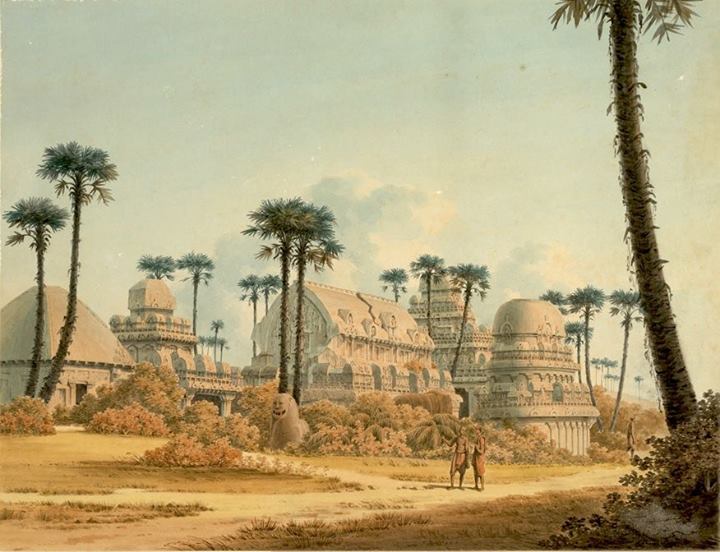 Watercolour of the five 'rathas' at Mamallapuram, by John Gantz, c.1825. Inscribed: 'North View of the 5 Pagodas about one mile south of Mahabilipoorum showing also a Lion and Elephant, the latter as large as life, the former larger, the whole cut sculptured from solid Granite stones - from a Sketch by Mr J. Braddock. J. Gantz'.

John Gantz (1772-1853) and his son Justinian ran a lithographic press in India, but are remembered best for their watercolours of flat-top houses and public buildings in and around Chennai (Madras), dating to the first half of the 19th century. They both lived and died in India, in the service of the East India Company. Mamallapuram, a tiny village south of Chennai, was a flourishing port of the Pallava dynasty from the 5th - 8th centuries. The site is famous for a group of temples, a series of rock-cut caves and monolithic sculptures that were most likely created in the 7th century reign of Narasimhavarman Mahamalla. The rathas or chariots seen here are monolithic buildings carved out of granite and are similar in shape to the temple chariots used to carry deities in procession during temple festivities. Each Ratha is named after a hero from the Mahabharata, an epic Hindu tale.