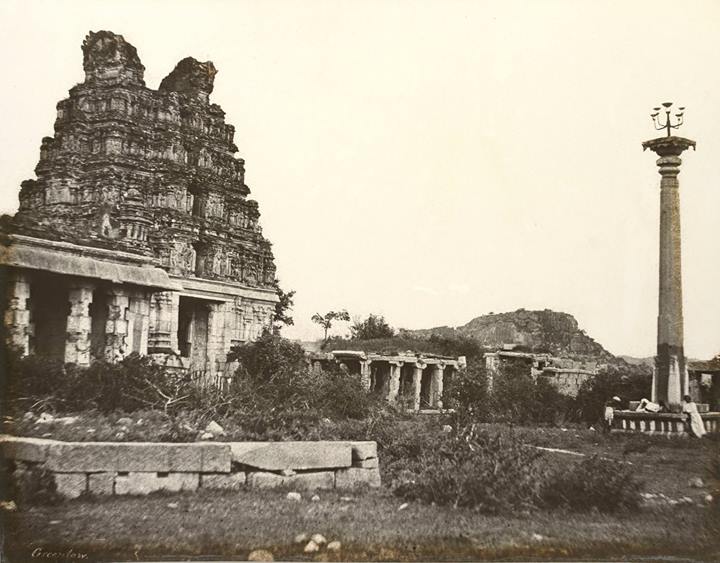 Vitthalapura beyond the temple complex :

Outside the eastern gopura are two colonnaded streets, one running northward ending at a smaller walled temple dedicated to RAMANUJA, a Vaishnava saint, the other street runs eastward and functioned as a bazaar street and ceremonial route for temple chariots. It continues for almost one kilometre before ending at the utsava mandapa at the extreme eastern boundary of Vitthalapura. This ornate open pillared hall is embellished with plaster images of the Alvar saints on its parapet and carvings on its ceiling. This suggests that images of the saints were also brought here in procession.

Originally there was a lofty lamp column (12.2m high) in front of the eastern gopura but it now lies broken in pieces.

On the north side of the chariot street is found the temple tank, a large rectangular and stepped tank in the middle of which is a small pavilion. The tank is surrounded by its own colonnades and is approached through a gateway with sculpted horse columns, the only examples of this animal motif at Vijayanagara.

The urban district of Vitthalapura functioned as a scholarly monastic centre with an important Vaishnava matha, a residential area, a centre for craft production and active bazaars, a pilgrimage centre and also a centre for Alvar Acharya worship. The Alvars were a group of poet saints associated with the Vaishnava devotional bhakti movement between the late six to ninth centuries. They were instrumental in establishing particular shrines as pilgrimage centres in Vitthalapura. It is likely that when the images from the main sanctuary were taken in procession at festival times, they would have stopped at these temples, probably in a clockwise circumambulatory sequence.

"On the north side of the chariot street is found the temple tank...The tank is surrounded by its own colonnades and is approached through a gateway with sculpted horse columns, the only examples of this animal motif at Vijayanagara." This is not true. To the South of the "chariot street", a bit to the East from the tank, is the "Kuduregombe Mantapa" with composite columns of rearing horses as shown in the picture.

Thanks for this clarification Shashi Kolar!