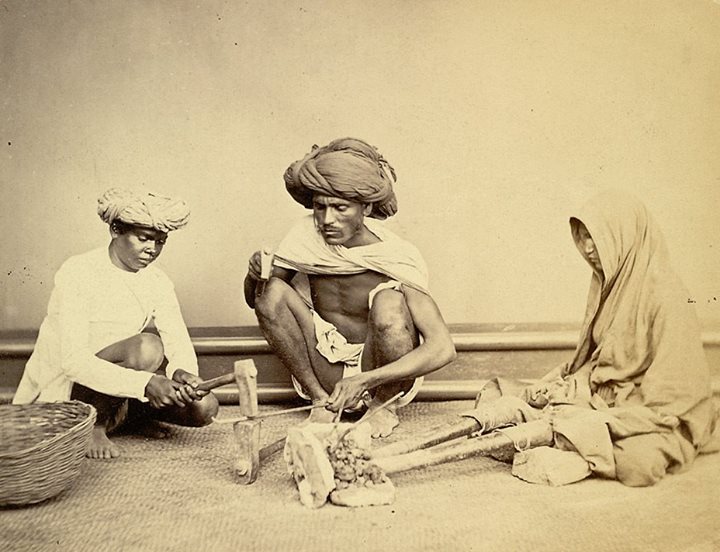 Digital Rare Book:
THE PEOPLE OF INDIA - Volume 5
A series of photographic illustrations, with descriptive letterpress, of the races and tribes of Hindustan
Edited by J. Forbes Watson and John William Kaye.
Published by India Museum in London - 1872


Image:
Studio portrait of blacksmiths at work in India, taken by an unknown photographer in c. 1873, from the Archaeological Survey of India Collections. This photograph of two men shaping a piece of metal, with a woman seated to the right, operating the bellows was probably shown at an international exhibition. A description in Volume V of John Forbes Watson's 'The People of India' states, "The blacksmith is as indispensible to the wants of the community in these days, when iron is so much used, as is the carpenter...He works sitting on his heels, and has an anvil, large or small, a sledge hammer used by an assistant, a smaller one for his own hand, pincers, files (which he makes himself and tempers), and a bellows, which consists of two sheep skins, with iron nozzles fitted to them open at the other end, which is fitted with two pieces of wood faced with rough leather. The blower opens and shuts these alternately, pressing out the air with his hand, so that a continuous stream od air is kept up in the charcoal fire. This simple apparatus can be moved anywhere, set up in a few minutes, and is perfectly effective for ordinary work."

This must be at the Great Exhibition London 1851