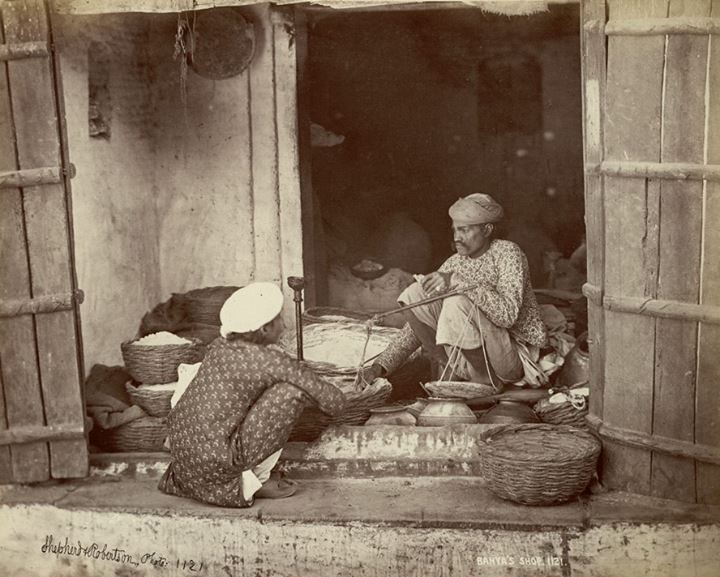 Digital Rare Book:
THE PEOPLE OF INDIA - Volume 4
A series of photographic illustrations, with descriptive letterpress, of the races and tribes of Hindustan
Edited by J. Forbes Watson and John William Kaye.
Published by India Museum in London - 1869


Image:
Photograph of a 'banya' or 'bunnea' (petty trader) in Delhi taken by Shepherd and Robertson. The photograph of the banya seated in the doorway of his shop, his scales in front of him, is used as illustration no. 184 in vol. IV of John Forbes Watsons's 'The People of India' (1869). The accompanying text states, "Bunneas are universal all over India. They are the hucksters or small traders of the people. A Bunnea's shop or stall contains meal and fine flour of wheat, with sogie or semoline, meal of millets and different kinds of pulse, rice, split peas, and pulse of many kinds; for all these are used in the farinaceous diet of the people, which is almost universal. He sells also parched rice and peas, gram, or horse corn, and generally every article of food, except vegetables and meat, with which he has no concern. Besides these he has condiments, salt, chillies, black pepper, green and dry ginger, and garlic (but not onions)...He has also a small store of spices - cassia, cardomoms, cloves, and mace; sugar, too, of various kinds; goor, or molasses; and, in some instances, sweetmeats...In short, the Bunnea is grocer and purveyor in general in every village and town in India. The Bunneas also lend money".