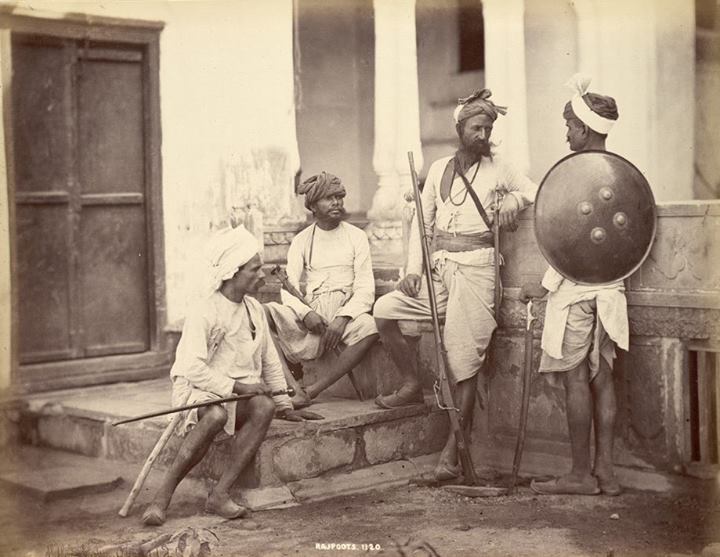 Digital Rare Book:
THE PEOPLE OF INDIA - Volume 3
A series of photographic illustrations, with descriptive letterpress, of the races and tribes of Hindustan
Edited by J. Forbes Watson and John William Kaye.
Published by India Museum in London - 1868

PREFACE::
During the administration of Lord Canning, from 1856 to 1863, the interest which had been created in Europe by the remarkable development of the Photographic Art, communicated itself to India, and originated the desire to turn it to account in the illustration of the topography, architecture, and ethnology of that country.


Image:
Photograph of Rajpoots from Delhi in India, taken by Shepherd and Robertson in c. 1863. This image of a group of four men, armed with shields, swords and muskets, is reproduced as illustration no. 199 in volume IV of John Forbes Watson's The People of India (1869). The accompanying text states, "The group photograph shows a party of Chohan soldiers armed in the native manner. The figure on the right has a broad shield at his back, which is slung over his left shoulder, and can be disengaged in a moment. It may be of rhinocerous hide, or of raw bullock or buffalo hide, pounded and cast, as it were, in a mould, which is nearly as strong. The central figure is a matchlock man; the other two ordinary swordsmen. Every Rajpoot is a master of his weapons, and most of them perform daily gymnastic exercises, of a difficult and arduous character, to an advanced period of life."

Could volume 3 be downloaded?

FB is not accepting this particular download link. Please click on the 'read online' link and choose 'i' on the top-right to find the pdf link.

The race classification by Forbes Watson & Kaye in these books, fed into the Martial race vs Non-Martial race classification undertaken by British India, post 1857. These books are from 1868. Worth exploring Forbes Watson & Kaye's thoughts/influence on Arthur de Gobineau school of Aryan race theory too. Twisted anthropology ( see wiki -> http://en.wikipedia.org/wiki/Martial_Race )