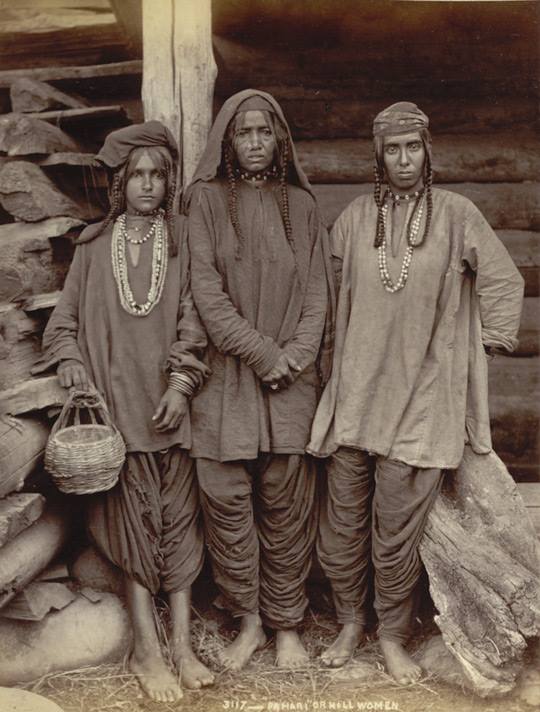 Digital Rare Book:
THE PEOPLE OF INDIA - Volume 1
A series of photographic illustrations, with descriptive letterpress, of the races and tribes of Hindustan
Edited by J. Forbes Watson and John William Kaye.
Published by India Museum in London - 1868


PREFACE::
During the administration of Lord Canning, from 1856 to 1863, the interest which had been created in Europe by the remarkable development of the Photographic Art, communicated itself to India, and originated the desire to turn it to account in the illustration of the topography, architecture, and ethnology of that country.


Image:
Full-length portrait of three Paharia women in the modern-day state of Jammu and Kashmir, taken by an unknown photographer in the 1890s. The text accompanying a similar image of Paharis in John Forbes Watson's 'The People of India' (1869) states,"The Paharis of Bhaugulpoor are a race, inhabiting the hilly and jungly country (the name signifies hillman) of that large territory...They are hunters rather than cultivators. They are largely employed as coolies (or luggage bearers) by persons travelling between the hill and plain country."

So long I have searched for a copy of this. Thanks a lot!