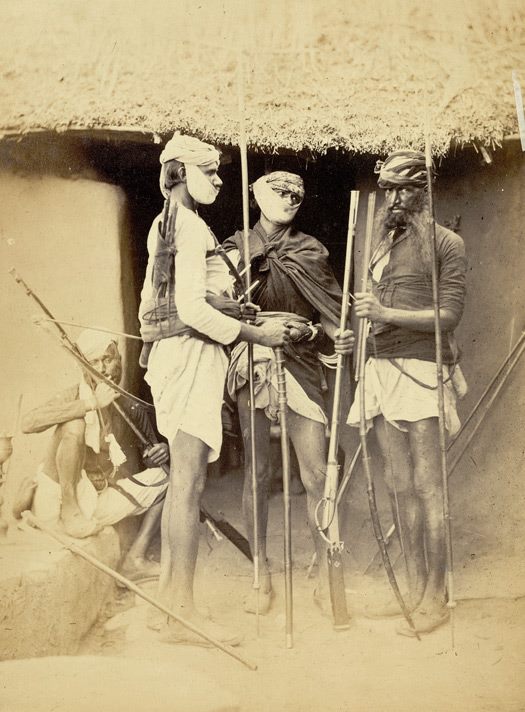 Digital Rare Book:
Lectures on some criminal tribes of India and religious mendicants
By George Whitty Gayer
Published in Nagpur - 1909

Image:
A group of four men of the Purriar Meenas tribe in Rajasthan, photographed by Eugene Clutterbuck Impey in the early 1860s, from the Archaeological Survey of India Collections. In the 19th century the Government of India commissioned a series of ethnograhic photographs of different tribes, races and castes. Capt. E.C. Impey of the Bengal Staff Corps was appointed to cover the areas of Delhi, Agra and Rajasthan. Figures were often posed to display their characteristic attributes and artefacts; in this image the men are posed in front of a thatched house, and armed with matchlocks, bows and other weapons.

More than 2.3 million were decriminalized in 1947, as India became free. Important to provide modern context to some of these old writings. "Meenas" , described here as criminals, have a "fish" insignia on their flags even though they don't speak a dravidian language where "meen" is "fish" & has been much debated in recent context of indus script decipherment. ( http://en.wikipedia.org/wiki/Criminal_Tribes_Act )