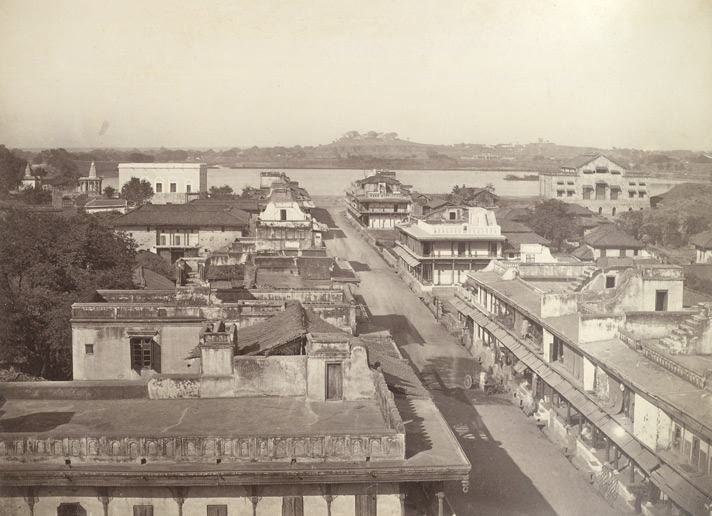 This view of Nagpur was taken in the 1860s by an unknown photographer. The modern city was established in the eighteenth century. However, the earlier history of the district is obscure with elements that can be dated as far back as the fifth century AD. Originally the area was populated by aboriginal Gond tribes who remained in power until the early eighteenth century, many of whom still live in the region. The British annexed the territory in 1853 following a lapse in the local succession. In 1861, Nagpur became the British capital of the Central Provinces and following the opening of the Great Indian Peninsula Railway in 1867 it also developed as an important centre for trade. The area is today famous as the orange-growing capital of India.

Here is a more recent view of Seetabaldee fort, taken from the same direction -

The photo may show the streets down which the EIC Troops attacked to drive the Arabs out of Nagpur. The battles at Nagpur are curious because while overtly the Rajah had a huge Indian Army with a Arab bodyguard, he was covertly negotiating with the EIC in an attempt to come over to the EIC side, but he was not able to do so with the British first destroying the Rajah's bodyguard, who he could not himself dismiss. After the defeat of the Arab led attacks on Sitabuldee, the Rajah sent his Indian troops south and east of the city and came into the EIC Residency which was on the reverse of the slopes in the far distance on the hills in the photo. The defeated Arabs and Hindoostanis, had retreated into the city, and were thought to number about 5000 fighters. The big lake is I believe a tank called in the British accounts of the time as the Jumma Talao. A series of advances on the 19th, 20th and 21st the EIC Sepoys fought there way across the suburbs around the tank that can be seen in the photo. On the 21st the advance was halted while negotiations were carried out with the Arabs. As these were unsuccessful the attack started again on the 22nd, and 24th. During the previous days the EIC had captured 5 guns from the Arabs, and these guns a an EIC Howitzer battery were used to batter in a tower and gate which probably stood at the end of these tall buildings. The attack under Lt. Col. Scott and Major Pitman, were trying to capture the Toolsee Baugh, and a gate. That attack and another on the Jumma Durwazza were repulsed and the British and Indian EIC soldiers lost over three hundred men in close quarters fighting. The Arabs then decided to try to negotiate a safe conduct to the coast, and discussions continued until the 29th of December, when it was agreed that the EIC would pay them 50,000 rupees, and escort them to Mulkapoor. They then went off to Kandesh. I would imagine that the fighting here must have made a lot of damage in this and the nearby streets, and that they must have been repaired after 1819. I hope that I have the locations correct, as I am only working from Google Earth and Valentine Blacker's 1820 account and maps. If it was possible to get pictures of locations closer to Sitabuldee without upsetting the military, who I understand from a source near Nagpur arrange open days for time to time, I would be very grateful to receive them.

Interesting account, Nick. The area surrounding the fort is very congested now. Mix of markets & old residential buildings. An old Ganesha temple on one side of the Sitabuldi fort hill, is open to public. Can share photos of the temple & some areas surrounding the fort with you on email, if it helps you. The lake is not far. Around it, is an old zoroastrian fire temple. The famous "Empress Mills" is around the corner. Was being demolished & turned into a Mall & Residential high-rise complex when I last visited it, 2 years back. The RSS ( Rashtriya Sewa Sangh) headquarters, with its own history museum housed inside it, is in a lane near the lake. Nagpur is the hub of 2 important national movements - RSS & Neo-Buddhist (Dalit/Ambedkar). Their iconography dominates the face of the city. The layers of Parsee textile industry, EIC & Colonial era history are buried below it. Nilesh Raut, is a young resident of Nagpur who I had a chance meeting with 2 years back & he was kind enough to show me around this part of the old city. Please connect with him on FB & he may be able to fill in the local details & fort photos for you. Nagpur museum is packed with treasures too but its a government run bureaucratic organization & doesn't allow photography inside. May be worth writing to them too. I recall a whole section on Sitabuldi fort in there.

I hope one day to visit Nagpur, it is on a long list of places, I would like to visit as so many interesting things seem to have happened there. I will pull out a few of the maps I have and try and complete my draft blog post that I have had underway for a couple of years.

Can't believe, I don't know exactly which part of Nagpur it is? I was there from 1999 to 2002... something look like old Kerala area only