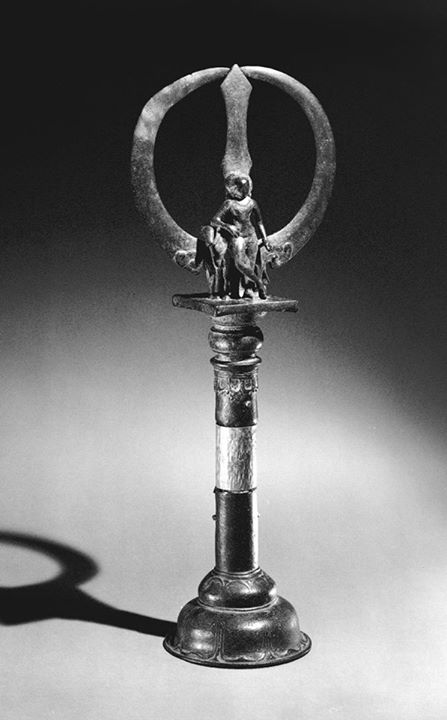 Digital Rare Book:
The Trident, the Crescent, and the Cross - A view of the religious history of India during the Hindu, Buddhist, Mohammedan, and Christian periods.
By Rev. James Vaughan
Published by Longmans, Green & Co., London - 1876


Image:
A bronze trident (triśūla) in two parts (prongs and separate round base joined to the upper part by a modern wooden shaft), with an image of Śiva Vrsavahana, the god leaning up against his vāhana, the bull (Nandī) on the platform below the middle tang of the trident. The features of the image as well as the details of the clothes and jewellery have been obliterated by a millennium of ritual lustrations and from being touched by devotees.

The trident is one of the usual attributes with which Shiva is shown. As in the case with the weapons brandished by different gods, the trident not only signifies the destruction of evil but also the bestowal of grace because it severs the human soul from the endless cycle of reincarnation. Thus, the trident becomes an object of devotion explaining why such images are produced and regularly worshipped.