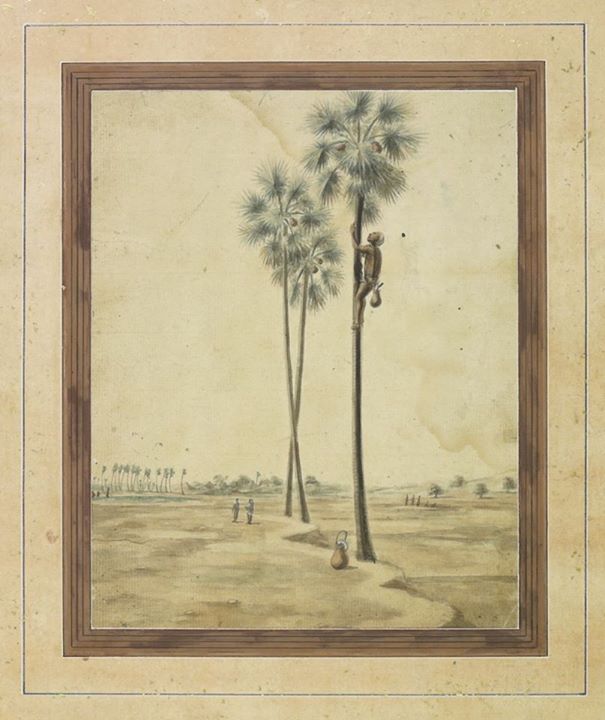 The term â€˜Company paintingâ€™ is given to pictures made by Indian artists for the British in India, particularly employees of the East India Company, the trading firm that by the 18th century had acquired a territorial empire in India. Most Company paintings are anonymous, but this one, dating from about 1805, is by an artist called Sewak Ram (ca.1770â€“1830), who lived in Patna in northern India. It shows a â€˜toddy tapperâ€™ at work. The English word â€˜toddyâ€™ derives from the Hindi tari, meaning the fermented sap of the palmyra and other palms, such as the date and coco palm. In India toddy, in addition to its alcoholic uses, serves as yeast for leavening bread. It is obtained by climbing and puncturing the tree and then allowing the white juice to trickle down into a jar or pitcher.

Patna School of Painting or Patna Qalam or company painting is a style of Indian Painting, which existed in Bihar, particularly in Patna in the 18th-19th centuries. Patna Qalam was India's first miniature painting which dealt exclusively with the commoner and his lifestyle also helped Patna Qalam paintings gain popularity amongst Britishers.

Another example of Patna Qalam :

Parvez Akhtar can you please share some more works of Patna Qalam?

Is there a book with these painting? I would be very interested in getting a copy

This book on Bareilly area crafts has 11 illustrations & related descriptions of crafts/trades circa 1820. The persian manuscript was lying in the "Food" section of the library for years until an Indian scholar discovered it. "Cooking kebabs" is just one of the arts of the Bareilly area. Mehr Afsan Farroqi's book with persian & english translation text & illustrations has been published by Aryan books/IGNCA, Delhi. ( http://www.library.upenn.edu/collections/sasia/crafts1820/ )

Thank you all for these treats. The British |Museum Oriental Library needs a look into as I found what was a Pashto MSS entirely in Persian!