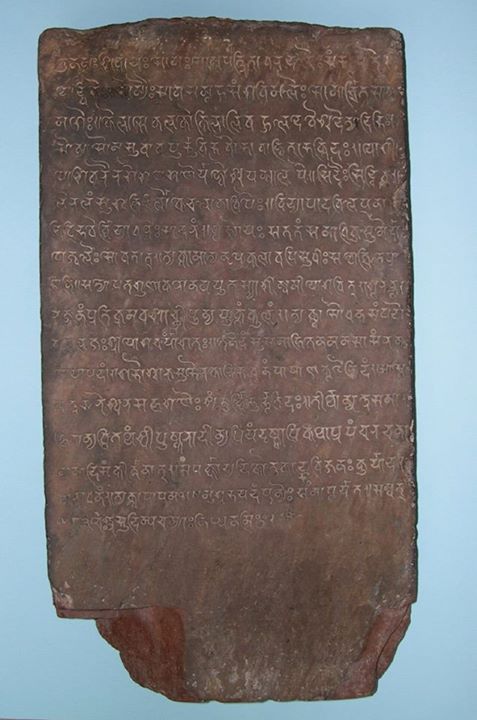 Image:
Inscribed slab.Slab engraved with an inscription in Sanskrit recording the building of a temple of Śiva by a pious ascetic named Vakulaja. Made of sanstone.

Oṃ. Adoration to Śiva.
1) May that Bhava -- who, united with Umā (somaḥ), is praised by gentle brāhmaṇas, the soma-worshipping singers of Sāmans, whose lips are sanctified by (draughts of) Soma juice, and who are pure through their connexion with numerous Sāmans -- he who (is lauded) by the gods, the Daityas, and the rest on Kailāsa that abounds in flocks of sweet-voiced koils, he whose body carries the moon nectar and who grants devotion -- protect all beings on earth.

2) May he afford protection who (himself) an ascetic and a treasure of great happiness, must constantly be worshipped devoutly with the flowers of abstract meditation, rendered brilliant through attachment (to him), by the best ascetics, by the crowds of gaṇas on the mountain, by the Yakṣas in their home, by the Siddhas whose strength consists in supernatural power, and by kings in (this) world, (and) by the Vidyādharas whose might is derived from anointing the feet of (the goddess of) knowledge and similar services rendered to her.

3) Vakulaja, who even in (this) Kali (yuga) when ministers and princes are disregarded, and when (all) creatures are destitute of purity, (is) wise, truthful, a mine of good qualities, endowed with modesty, liberal, patient (in austerities), versed in (the doctrines) of Yoga, a hero against cruel men, gradually abandoned his family possessed of prosperity and spiritual merit (being) his riches, turned to the practice of glorious Yoga.

4) With perfect devotion he built, in order to ward of misfortunes, this temple of Śambhu with beautiful and brilliant most excellent stones, where Śambhu-Jhareśvara, the giver of welfare, dwells together with the gaṇas. All places of pilgrimage, even famous Pushkara and the rest, are concentrated in this (building).

5) If men in this world worship him (Śiva), after merely visiting this (temple), by conversations (regarding him), by lauding his name and so forth, by becoming united with or attached (to him), they will be freed from all guilt that causes dreadful dangers and be filled with spiritual merit. Saṃvat 983 on the fifth day (5) of the month of Caitra the completion.

what is this please enlighten1