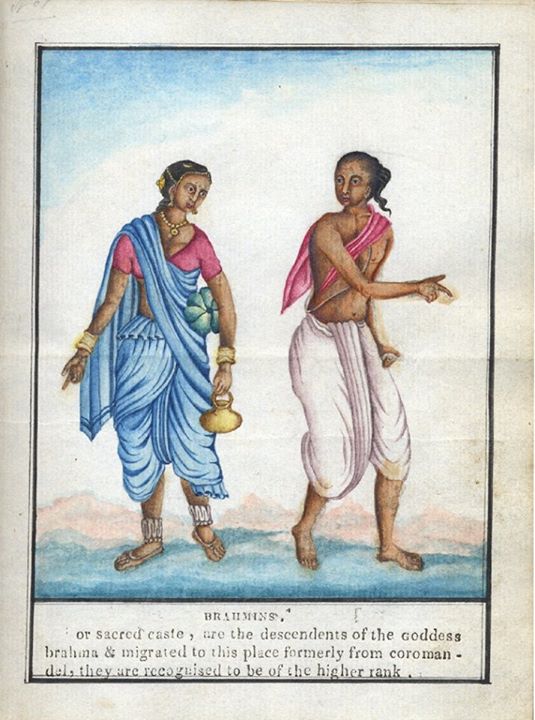 Page from an album of sketches of costumes of South India (opaque watercolour with letterpress). Company School, on European paper watermarked Moreley & Saunders 1842 depicting BRAHMINS. The man, with his hair gathered in kudumi at the back of his head, wears a dhoti and an angavastra. Across his chest hangs the yajnopavita. His wife wears a nine-yard sari, a short blouse and is heavily bejewelled. In her right hand she carries a water vessel and a large squash is wedged between her waist and her right arm. Mountains are drawn as a background.

Curator's comments:
This series of 24 watercolours bound in leather is of special interest for it focuses on a range of castes and tribes which inhabit the regions of Malabar, Cochin and Travancore, part of modern Kerala. A number of the communities illustrated, such as: Konkanis, Nazarenes (Syrian Christians), Jonagans, etc. were settled in the towns. Others, such as: Muli Koravas, Malai Waders etc. inhabited the hilly forested tracts between Tamil Nadu and Southern Kerala (formerly Travancore). Not only the regionally specific selection of the themes, but also the ‘Westernised’ extremely delicate style of the paintings, are very unusual. Each painting shows a man and his wife, in their typical dress and carrying the tools of their trade. An extensive use of modelling, a consistent use of soft, muted colours enhanced by chiaroscuro effects, and an attempt at western perspective where the background and foreground are discreetly suggested, all reveal the artist’s indebtedness to Western influence. At the bottom of all but the first painting is a letterpress caption giving the appropriate details on the illustrated community. The text was written by a person reasonably familiar with English but not a native speaker. In this inscription, the writer mentions the ‘goddess Brahma’ and this raises the question whether the person was perhaps either a Christian or a Muslim, and thus not particularly knowledgeable about Hindu gods and goddesses.