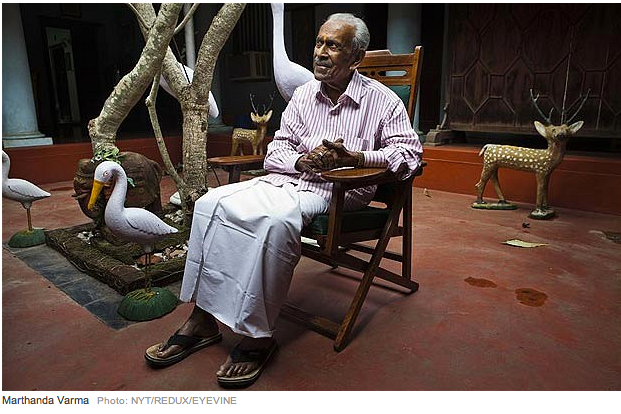 Sree Uthradom Thirunal Marthanda Varma was an Indian royal and custodian of a temple whose 'cursed’ vaults are filled with treasure worth tens of billions.

Sree Uthradom Thirunal Marthanda Varma , who has died aged 91, was head of the family that once ruled the south Indian kingdom of Travancore and remained largely unknown to the wider world until 2011, when it was revealed that a temple of which he was hereditary custodian contained untold treasures.

Marthanda Varma was generally referred to by the title of Maharaja, even though the maharajas of Travancore have been commoners ever since they acceded to the Indian Union in 1949. He was greatly revered for his asceticism; it was said that he would carefully cut out the blank sides of envelopes to provide himself with notepaper, and that when staying in Delhi he preferred to lodge at an ashram rather than a hotel.

Such frugality was in stark contrast to the fabulous wealth that was revealed when the Indian Supreme Court ruled that the vaults of the ancient Sri Padmanabhaswamy temple, in Trivandrum, which had been sealed for 140 years, should be opened.

It had always been known that there was treasure in the temple, although no one knew how much. According to locals Travancore maharajas who oversaw the building of the temple more than four centuries ago had secreted immense riches within its underground stone vaults.

After Independence, all the major temples under the control and management of the erstwhile princely states came under the control of local boards but, under a special covenant, the custodianship of the Padmanabhaswamy temple continued to rest with the last ruler of Travancore, Marthanda Varma’s brother Maharaja Chitra Thirunal Rama Varma.

Simple living, high thinking. If only more of the rich were like him.

I appreciate and respect his exemplary simplicity and the extremely conscientious life he consistently led to the very end. Absolutely worthy of emulation by all in this day and age of growing shameless materialism. But alas he squandered away a golden opportunity to prove himself a leader and visionary. He chose to defend and perpetuate irrational myths and beliefs rather than more pragmatically (and dare I say, ethically and morally) return back to the people and society what morally belongs to them. As of now, he perhaps holds the dubious distinction of being defender of among the world's worst amassment of people's wealth!

He,and his family,preserved that wealth -and did not siphon/secrete it . Imagine that sort of wealth in a temple/trust run by Govt.officials..the gold would have been converted to tin.,the jewels to stone...or to offshore accounts. If the trustees "returned"this wealth to the "people" there would have been contradictions on how to do so. They served the nation,the people by preserving this wealth in trust. Besides..Travancore State,was well administered and this wealth was like their "reserve bank " ..safe with its ruling family.

More than any one the British would have looted it.