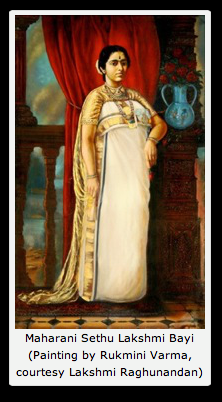 Essay:
The Last Queen of Travancore
Written on the blog titled 'INORITE'

The Travancore Royal Family, considered among the oldest royalties of India, is descended from the historic Chera dynasty of South India. That branch of the Cheras that settled in the extreme south of Kerala was called the Kupaka family and a similar branch settled also in the extreme north and came to be known as the Mooshikas. During the course of the last 800 years, the Kupakas found themselves on the brink of extinction (due to the absence of female members so essential to the perpetuation of the family in the matrilineal Marumakkathayam tradition) on several occasions and in every such instance the line was continued by adopting heirs from the Mooshika house. Indeed whereas the Mooshikas were known as the “Northern Kolathiris”, the Kupakas were addressed as the “Southern Kolathiris”. The first such adoption occurred in 1315 when two princesses of Mooshika (Kolathunad) were adopted into Kupaka (Travancore). The place known as Attingal was set apart for them and they were installed as the Senior and Junior Ranis of that place and it was decreed that only the sons of the Attingal Ranis would henceforward succeed to the Travancore throne. Further adoptions took place in the years 1684, 1718, 1748, 1788 and 1857. The “maker of modern Travancore”, Anizham Thirunal Marthanda Varma Maharajah (1730-1758) was born of the 1688 adoption (made by the legendary Aswathy Thirunal Umayamma Rani). His successor Dharma Rajah Karthika Thirunal (1758-1798) was the son of the princess adopted in 1718. The next ruler Avittom Thirunal Balarama Varma Maharajah was a descendent of the 1748 adoption. The adoption of 1788 brought about a long line of remarkable rulers starting with Maharani Ayilyam Thirunal Gowri Lakshmi Bayi (1810-1815) and ending with Maharajah Moolam Thirunal (1885-1924) who was the great grandson of Gowri Lakshmi Bayi. Moolam Thirunal’s mother Pooradam Thirunal Lakshmi Bayi, the sole female member in the royal family at the time, died eleven days after his birth in 1857 and once again the Travancore House found itself facing the threat of extinction.

Only a few years after the 1788 adoption, Tipu Sultan invaded Malabar and all the Rajahs of that place, unable to offer resistance, fled to Travancore. Once the war was concluded and peace was restored, the main branch of the Kolathunad family, known as Chirackal Kottaram, returned to their ancestral seat. However three cousins of the recently adopted Attingal Ranis who belonged to Chenga Kottaram remained in Travancore and they were settled at Ennakkad, Mavelikkara and Prayikkara respectively by the ruling Maharajah. Thus when in 1857 the need was felt for another adoption, the Maharajah decided to adopt princesses from one of these three houses.

Among the nominees for adoption were two daughters of Chamunda Amma Thampuran of Mavelikkara. The then Maharajah Uthram Thirunal found them satisfactory and thus in 1857 the 6th adoption into the Travancore royal family was concluded by adopting Bharani Thirunal Lakshmi Bayi as Senior Rani and Bharani Thirunal Parvathi Bayi as Junior Rani.