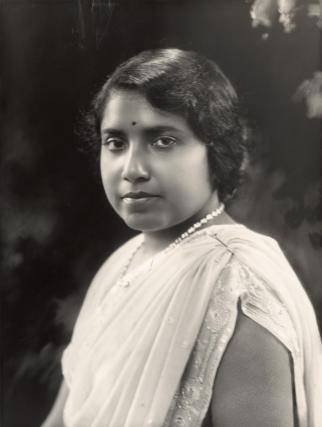 Article:
Benign presence - Remembering Sethu Lakshmi Bayi, regent of Travancore, as a queen and a grandmother.
By Shreekumar Varma
The Hindu

MAHATMA GANDHI wrote in his paper Young India: "My visit to Her Highness was an agreeable surprise for me. Instead of being ushered into the presence of an over decorated woman, sporting diamond pendants and necklaces, I found myself in the presence of a modest young woman who relied not upon jewels or gaudy dresses for beauty but on her own naturally well formed features and exactness of manners. Her room was as plainly furnished, as she was plainly dressed. Her severe simplicity became an object of envy."

Gandhiji was writing about the Regent Maharani of Travancore, H.H. Sethu Lakshmi Bayi (1895-1985). His words acquire even more significance because he had to leave without accomplishing his mission, that of opening the temples in the state to all classes of people without discrimination. The Maharani told him: "I agree this should be done. And it will be done. But, as the Regent, I cannot take such a major policy decision. That will have to wait for my nephew." True to her words, the Temple Entry Proclamation was signed during Maharaja Sri Chitra Tirunal's reign.

Soheb Vahab: Thanks for the correction. I was doubtful about the description when I posted this picture since the facial features did look a bit different. But I presumed that she might have looked different when she was younger and also that the NPG is generally a reliable source. And I was also taken by this wonderful portrait. Source of the photo: http://bit.ly/IRyHnc

She ruled Travancore state as Regent, till her nephew Sri Chithira Thirunal beacme a major and the British allowed him to assume the throne as ruler.

Rare Book Society of India: NPG got it wrong; they were notified as early as 2010, but changes haven't seemed to appear as of yet! (they said they were short-staffed)