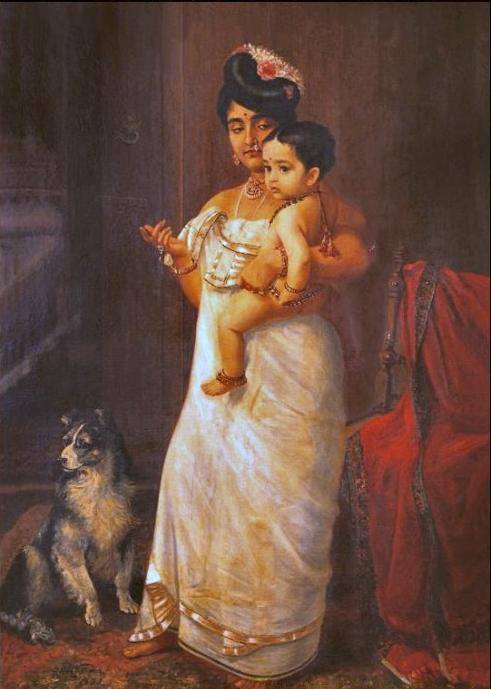 Raja Ravi Varma was married to Pururuttathi Nal Bhageerathi Amma Thampuran (Kochu Pangi) of the Royal House of Mavelikara and they had two sons and three daughters.

Their elder son, Kerala Varma, born in 1876 went missing in 1912 and was never heard of again. Their second son was Rama Varma (born 1879), an artist who studied at the JJ School of Arts, Mumbai, married to Srimathi Gowri Kunjamma, sister of Dewan PGN Unnithan.

His descendants comprise the Mavelikara Royal house while two of his granddaughters, including the said Sethu Lakshmi Bayi, were adopted to the Travancore Royal Family, the cousin family of the Mavelikara House, to which lineage the present Travancore Maharaja Uthradom Thirunal Marthanda Varma belongs. Well known among his descendants are writer Shreekumar Varma (Prince Punardam Thirunal), artists Rukmini Varma (Princess Bharani Thirunal) and Jay Varma,[5] and classical musician Aswathi Thirunal Rama Varma among others.

Rare Book Society of India: The description says that the portrait was painted in 1893. But the post above and wikipedia says that H.H. Sethu Lakshmi Bayi was born in 1895. How is that possible?!

Naveen Bharathi: Valid observation. The date needs to be corrected. Here is the source: http://bit.ly/1cy8jpX

Very interesting story of Travancore state. Sri Chitra Thirunal Balaram Verma was a great ruler for the development of this state.