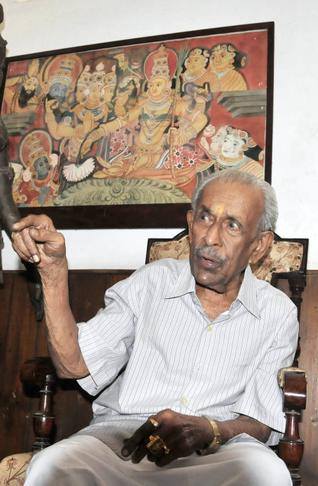 Uthradom Thirunal Marthanda Varma, 89, is the seniormost member of Travancore's erstwhile royal family, yet simple and unassuming in his manner. He met A. Srivathsan, Deputy Editor of The Hindu on July 17 at the Pattom Palace in the heart of Thiruvananthapuram and answered questions regarding the Sree Padmanabhaswamy temple — which is in the news in the context of valuable finds in its underground vaults in recent weeks — and his family's association with it. For reasons to do with the ongoing legal proceedings, he expressed his inability to answer any questions relating to the opening of the temple vaults. Excerpts from the interview:

Question:
The Travancore royal family took a different approach to ruling its territories and managing the properties of the State. The king served as Padmanabha Dasa — [who] ruled on behalf of god and swore allegiance only to god. In 1949, Maharaja Chithira Thirunal Rama Varma came close to refusing the post of Rajpramukh because he could not “give oath to the Indian government.” What led the Travancore kings to take to the idea of dasa? In what way is this concept different from the modern idea of trusteeship?

Answer:
There are two things to the idea of Padmanabha Dasa. One is the A to Z of the concept, which is new, and the other is the corollary, which is ancient. Let me explain the A to Z first. There was a king in England called Henry VIII. He had two passions: one, he wanted to change his wife, get a second one; and two, he wanted to impose a new faith. He asked his Cardinal to find a way to achieve this. When his Cardinal suggested that he start a new faith, the Church of England, the king asked how and why people would listen to him. The Cardinal had a simple answer. He advised him to add one more to his catalogue of names: Defender of the Faith. And then, if anyone goes against it, ‘your defence will be to go offensive,' he advised. That is Defender of the Faith, but we [the Travancore kings] are attendants of faith. That is a dasa.

The corollary of this concept is in the story of Bharata in the Ramayana. When Bharata refused to rule Ayodhya by himself, he took Rama's sandals, placed it on the throne, wore the robe of an ascetic and ruled on his brother's behalf. The god is the master.

When you are trustee, chairman, benefactor or president, your personality is still there. In this [dasa] nothing is there, you are nobody. You carry on your duty.