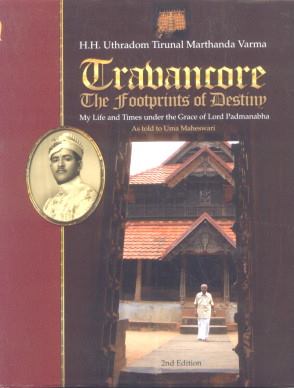 New Book:
H.H. Uthradom Tirunal Marthanda Varma
Travancore : The Footprints Of Destiny : My Life and Times Under the Grace of Lord Padmanabha
As told to Uma Maheswari
Published by Konark Publishers - 2011

Travancore: the Footprints of Destiny is an unusual work among the chronicles of the amazing history of Travancore. It is literally a work from within. That is, a fine blend of historiography and autobiography. The author, the present Maharaja of Travancore, renders his life story from the larger perspective of the historical forces that have shaped the life and times of Travancore during the past millennia. The grand sweep of history reaches its spectacular culmination, as it were, in the historic rites of passage-the accession of Travancore to the Indian Union after independence. The Maharaja has had the rare privilege of witnessing history from close quarters, especially during the time his elder Brother His Highness Sri Chitira Tirunal was the King of Travancore. His story evocatively traces the evolution of Travancore into one of pre-independent India’s most progressive princely states. Amidst the larger warp and weft of history is his own story deftly woven in Central to the universe of Travancore and therefore to its rulers has been the Sree Padmanabhaswami Temple. The rulers of Travancore have regarded themselves as Padmanabha Dasas, or the vassals of the deity. His Highness has been no exception. Throughout the rendition of the exceptional history of Travancore and his own story, the benign presence of Sree Padmanabhaswami reinforces the narrative. Therefore, more than dispassionate history, the book is an exceptionally intimate evocation of history. The book will add considerable value to Travancore’s historiography through an unusual autobiography as told to Uma Maheswari who helped the Maharaja to record history seen live. In fact, it is also the first of its kind during the past 300 years of Travancore’s history.

Buy this book at Amazon: