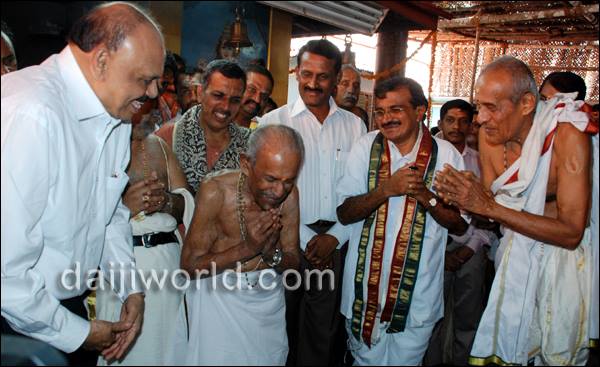 End of an era…

THIRUVANANTHAPURAM: Uthradom Thirunal Marthanda Varma, the titular head of the Travancore royal family passed away due to age-related complications at 2.20 am on Monday. He was 91, and took great interest in the day to day activities of the Sree Padmanabha Swamy Temple, of which he is the custodian.

Marthanda Varma followed the rites and rituals of the temple since 1991, following the death of his elder brother and the last sovereign of Travancore, Sri Chithira Thirunal Balarama Varma. Health allowing, Marthanda Varma would visit the temple at 7am, if he missed a day he was fined Rs 157.35 as per traditional rules.

A staunch vegetarian and teetotaller, Marthanda Varma did not drink coffee or tea and hated smoking. He once told this reporter that after his temple duties, he liked to perform media surgery of at least five papers in the morning. "I would keep clippings of articles that touched me since 1935, mostly human interest stories, stories of hope and those of religious nature." He had sweet tooth and a story for everything, be it about how ice creams originated or about the secret knowledge of the Vedas.

When the temple's phenomenal wealth became public knowledge, tampuran (as he was fondly called) shut out the gossip and the adverse media reports; he said that it had saddened him that the temple must be known only for its wealth.

Some two years ago the tampuran expressed a desire to salvage some 4,000 photographs that he had taken and this led to the birth of the Sree Uthradom Thirunal Marthanda Varma Chithralayam which gives an authentic perspective on the glorious past of Travancore. Besides photography he had a craze for cars, so much so that Mercedes Benz presented him with medals, for completing the one-lakh mark. He had once said that he clocked 40 lakh miles and that his moniker was "A mile a minute".

what a beautiful soul.. god bless his soul.. there are few like him