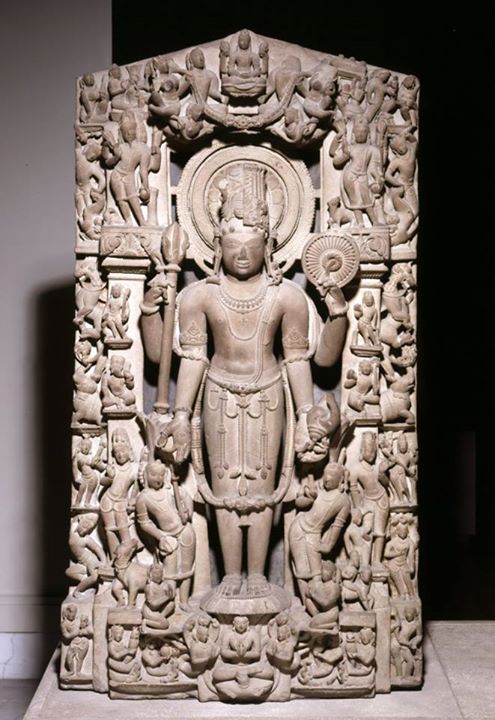 HARIHARA is the name of a combined deity form of both Vishnu (Hari) and Shiva (Hara) from the Hindu tradition. Also known as Shankaranarayana ("Shankara" is Shiva, and "Narayana" is Vishnu), Harihara is thus worshipped by both Vaishnavites and Shaivities as a form of the Supreme God, as well as being a figure of worship for other Hindu traditions in general. Harihara is also sometimes used as a philosophical term to denote the unity of Vishnu and Shiva as different aspects of the same Supreme God. The exact nature of both Vishnu and Shiva (from their associated stories in Vedic and Puranic scriptures), and their position of difference or unity (or both), is a subject of some debate amongst the different philosophical schools.

Due to the fluid and diverse nature of Hinduism there are a wide variety of beliefs and traditions associated with both Vishnu and Shiva. Some schools hold that only Vishnu (including his associated Avatars) is the Supreme God, and others that Shiva (including his different incarnations) is actually the Supreme being. Some argue that both Shiva and Vishnu are the Supreme God—both being different aspects of the one person; and there are others still who regard the Supreme God as being ultimately formless (advaita, no material form) and thus see both Vishnu and Shiva as different facets of the one formless Brahman, with no material form.

Depending on which scriptures (and translations) are quoted, evidence is available to support each of the different arguments. In most cases, even if one personality is taken as being superior over the other, much respect is still offered to both Vishnu and Shiva by the other's worshippers (i.e. Shiva is still regarded as being above the level of an ordinary jiva and 'the greatest of the Vaishnavas' by Vaishnavas who worship only Vishnu).

Harihara is depicted in art as split down the middle, one half representing Shiva, the other half representing Vishnu. The Shiva half will have the matted locks of a yogic master piled high on his head and sometimes will wear a tiger skin, reserved for the most revered ascetics. Shiva's pale skin may be read as ash-covered in his role as an ascetic. The Vishnu half will wear a tall crown and other jewelry, representing his responsibility for maintaining world order. Vishnu's black skin represents holiness. Broadly, these distinctions serve to represent the duality of humble religious influence in the ascetic and authoritative secular power in the king or householder.[6] However, in other aspects Shiva also takes on the authoritative position of householder, a position which is directly at odds with the ascetic position depicted in his Harihara manifestation.

Image:
Standing figure of Harihara carved from a single slab of buff-coloured sandstone. The four-armed god is shown holding Śiva’s trident (triśūla) and rosary (akṣamālā) on the left, and Viṣṇu’s conch (śaṅkha) and discus (cakra) on the right. The headgear is symmetrically divided between Śiva’s matted locks and Viṣṇu’s jewelled crown. The image has a multi-banded halo, stands on a lotus and is set in a frame carved with a host figures in relief. Specific iconographic figures are shown on each side of Hari-Hara: those on the right represent the incarnations of Viṣṇu and those on the left the manifestations of Śiva.

HARI HARA The unity of the various deities is taught in the following legend. As Lakshmi and Durgā were sitting together in the presence of Siva, Lakshmi contended that her husband (Vishnu) was greater than Siva, because Siva had worshipped him. As they were conversing, Vishnu himself appeared, and, in order to convince his wife that he and Siva were equal, entered his body, and they became one. Another form of this story is found in the "Skanda Purān."Siva asked Vishnu on one occasion to assume the form of a beautiful woman, such as he did at the churning of the ocean to attract the attention of the asuras whilst the gods drank the amrita. Vishnu consenting, Siva became excited and sought to embrace her. As Vishnu ran away, Siva followed him, and though Vishnu resumed his proper form, Siva clasped him so tightly that their bodies became one, and a name Har-Hari, is given to the deities thus united http://www.sacred-texts.com/hin/hmvp/tn/27600.jpg