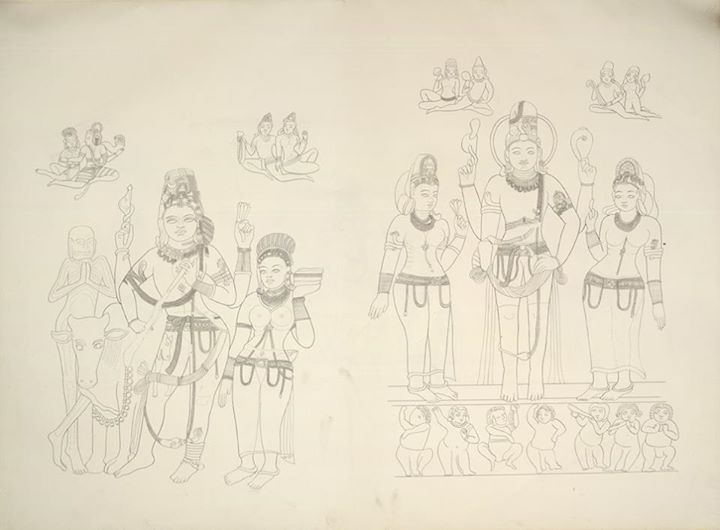 Pen-and-ink drawing of two sculptures from Cave I, Badami, depicting Harihara and Ardhanarishvara, by an Indian draftsman, dated 1853.

Badami, formerly known as Vatapi, was the capital of the Early Chalukya rulers in the sixth - eighth centuries AD. The town is situated between two rocky hills of red sandstone that surround an artificial lake. There are two later forts that overlook

the town. Around the south fort there are four rock-cut cave temples. Cave I is the earliest of the rock cut caves of Badami and belongs to the late sixth century. It consists of a long outer porch, a large columned hall (mandapa) and a small square sanctuary. Large sculpture panels are carved on the sides of the porch. The figure to the left in this drawing is Ardhanarishvara, a half male and half female figure, a combination of Shiva and Parvati. Near the Shiva side there is Shiva's vehicle, the bull Nandi and an emaciated figure of a sage man, the Rishi Bhringi. On the side of Parvati there is a female attendant. Ardhanarishvara has four hands, two of which hold a lyre (vina). The remaning left hand holds a battleaxe and a snake and the remaining right hand a lotus.

The figure to the right in the drawing represents Harihara, a combination of Shiva and Vishnu. The Shiva side is indicated by the presence of the battleaxe with a snake and Parvati standing on the god's right; the Vishnu side is indicated by a conch and the presence of Lakshmi on the left of the god. He stands on a pedestal with a carved panel of dwarves, the ghanas. His headdress consists of matted hair with a crescent on it while the other half is a jewelled crown. Over his head there is a flying couple (gandharva) on each side of the wall.

HARI HARA The unity of the various deities is taught in the following legend. As Lakshmi and Durgā were sitting together in the presence of Siva, Lakshmi contended that her husband (Vishnu) was greater than Siva, because Siva had worshipped him. As they were conversing, Vishnu himself appeared, and, in order to convince his wife that he and Siva were equal, entered his body, and they became one. Another form of this story is found in the "Skanda Purāna." Siva asked Vishnu on one occasion to assume the form of a beautiful woman, such as he did at the churning of the ocean to attract the attention of the asuras whilst the gods drank the amrita. Vishnu consenting, Siva became excited and sought to embrace her. As Vishnu ran away, Siva followed him, and though Vishnu resumed his proper form, Siva clasped him so tightly that their bodies became one, and a name Har-Hari, is given to the deities thus united http://www.sacred-texts.com/hin/hmvp/tn/27600.jpg

Ardhanarishvara at Cave 1, Badami from which the above sketch was done (the skeletal being is Bhringi):

Harihara at Cave 1, Badami from which the above sketch was done: