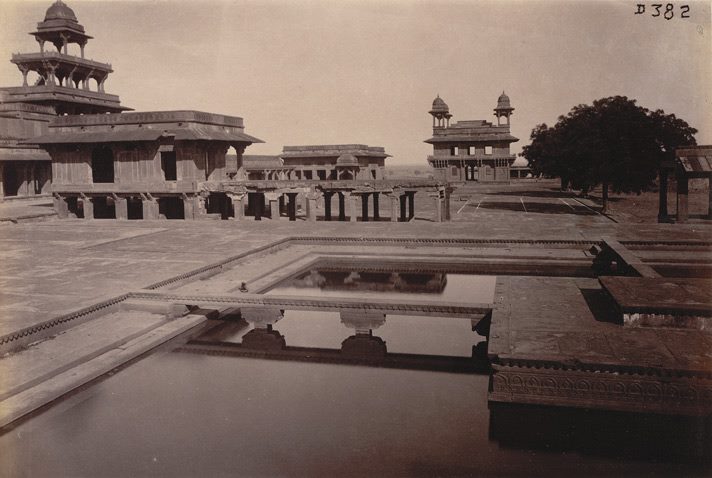 View looking north from the Khwabagh, showing the Panch Mahal and the Diwan-i-Khas, Fatehpur Sikri - 1893

Photograph of the Diwan-i-Khas at Fatehpur Sikri, from the Archaeological Survey of India Collections, taken by Edmund William Smith in 1893. This view looks due north from the Khwabagh (House of Dreams), with the ornamental pool, the Anup Talao, in the immediate foreground. Beyond, on the extreme left, is the Panch Mahal (Tower of the Winds), a five-storey palace, with the Diwan-i-Khas (Hall of Private Audience) in the background right of centre. To the left of the Diwan-i-Khas is the Ankh Michauli and the Astrologer's Seat, a small kiosk with elaborately carved struts developed from Jain designs, situated in the south-west corner of the Pachisi Court. At the extreme right a small part of the covered path leading to the Turkish Sultana's House can be seen. The palace city of Fatehpur Sikri was built by the Mughal Emperor Akbar (r.1556-1605) from 1571 to 1585. The entire complex is built of locally quarried red sandstone, known as Sikri sandstone. The Diwan-i-Khas is a plain square building with four chhatris on the roof. The interior is unique; in the centre there is a large carved pillar whose serpentine brackets support a circular platform which is connected to each corner of the building by four stone walkways

Khwaabgah...it must be. Panch means five na? So how can panch mahal mean house of winds?!

Did someone way that Panch Mahal means House of Winds? Are you thinking of the Hawa Mahal in Jaipur??