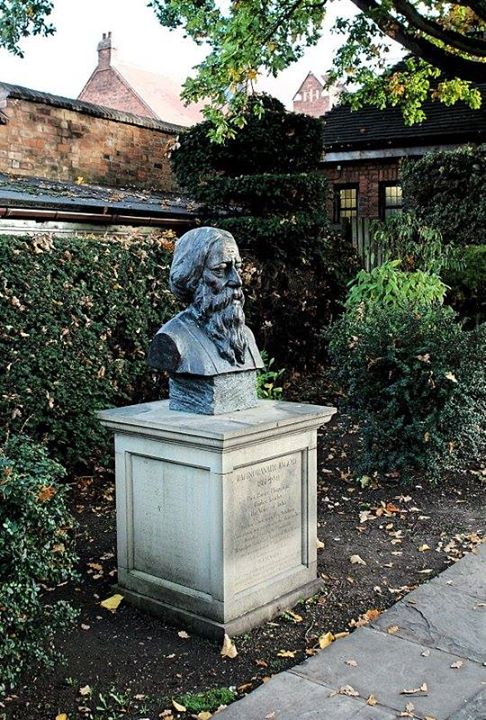 This post is not a Tagore anthology attempt. In a year that has been dotted with Rabindranath Tagore’s 150th birth anniversary celebrations, the poet has predictably engaged many in the research and analysis of his artistic oeuvre. If quality has come a cropper in much of this endeavour, quantity has more than made up for the lack of depth in scholarship.

I would like to mention a little known fact about the reverence with which Rabindranath Tagore is held in a distant land. During my last visit to Shakespeare’s birthplace, Stratford-on-Avon, I was pleasantly surprised and proud to see Gurudev’s bust adorning the garden path in the house where Shakespeare was born. He is the only other poet who has been given this honour. There is no statue of any other poet except Shakespeare in the whole of Stratford-on-Avon. This goes to prove Gurudev’s greatness as a poet and the recognition he has earned internationally.

Writing came easy and early to him and in 1874 his first published poem Abhilaash (Desire) was published anonymously in a magazine called Tattobodhini. Tagore’s first book, a collection of poems, was published by Tagore’s friend who wanted to surprise him. Having translated Macbeth into Bengali verse, it was later published in Bharati magazine. Following the style of Vaisnava Padalvali (verses), under the penname of Bhanusingha he wrote Bhanusingher Padavali. In his earlier literacy works, there was impact of his elder brother Jyotirindranath and his wife Kadambari Devi, and two magazines, Bharati and Balaka, which used to get published from the Tagore house, had his regular contribution in them.

Re: " ... a little known fact about the reverence with which Rabindranath Tagore is held in a distant land. " The bronze bust of Tagore that so surprised and moved Arindam when he came across it at Stratford-upon-Avon (as described and pictured above) was presented as a gift to the ' Shakespeare Birthplace Trust ' by the Indian High Commissioner in 1994. The podium bares the following inscription : " Rabindranath Tagore - Poet, Painter, Playwright, Thinker, Teacher - The Voice of India " ---------- On the plinth, engraved in Bengali, is Tagore's own translation of his poem in honour of William Shakespeare - which reads as follows : "When by the far-away sea your fiery disk appeared from behind the unseen, O Poet, O Sun. England’s horizon felt you near her breast, and took you to be her own. She kissed your forehead, caught you in the arms of her forest branches. Hid you behind her mist mantle and watched you in the green sward where fairies love to play among the meadow flowers. A few early birds sang your hymn of praise, while the rest of the woodland choir were asleep. Then at the silent beckoning of the Eternal you rose higher and higher till you reached the mid sky, making all quarters of heaven your own. Therefore, at this moment, after the end of centuries, the palm groves by the Indian sea raise their tremulous branches to the sky murmuring your praise."

The poem was written in 1916 in Bengali by RNT for the Tercentenary of Shakespeare's death.

Very informative....cannot explain in words how much i love and enjoy reading all your essays dada