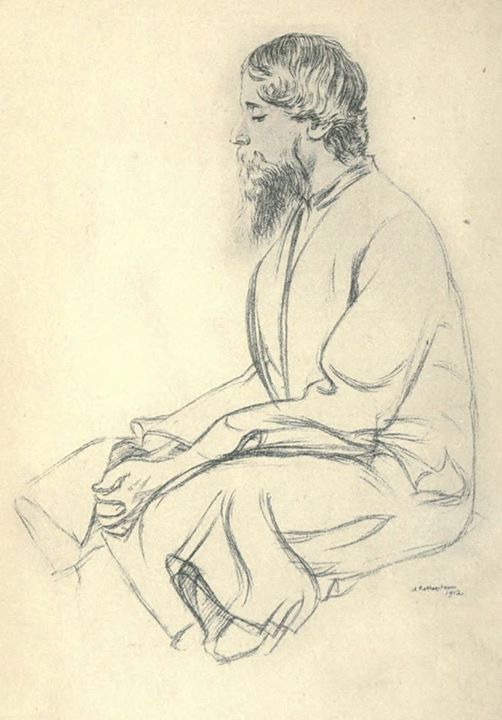 Digital Rare Book:
Gitanjali - A collection of prose translations made by the author from the original Bengali
By Rabindranath Tagore
With an introduction by W.B. Yeats
Published by Macmillan, London - 1913

who had drawn this sketch?

This sketch is by Sir William Rothenstein. During his visit to India, he worked closely with the poet's nephew, Abanindranath Tagore, the creator of 'Indian Society of Oriental Art'. Sir Rothenstein was also involved in the first publication of the ancient frescoes of Ajanta and Ellora caves.

Sir William Rothenstein (d.1945) - was something of a polymath - who played a significant role in bringing Tagore and his work to the attention of a much wider, international audience. He also served as a whole-hearted promoter of the Indian arts more generally - in the face of the firmly entrenched and snobbishly Euro-centric cultural attitudes that prevailed in his own time . As the following, brief extract makes clear : " In January 1910 [Rothenstein's] earnestness had an important and lasting effect when, with Walter Crane and Ananda Coomaraswamy, he went to the Royal Society of Arts in support of Ernest Havell, the retired principal of the Government School of Art in Calcutta, who protested against the school's policy for teaching Indian students, whose training consisted of copying classical casts and mediocre European art to the exclusion of indigenous Indian design and motifs. Sir George Birdwood, a former curator of the Government Museum in Bombay and a founder of the Victoria and Albert Museum in that city, declared that India had no fine arts and that the figure of the Buddha was no more spiritual than a ' boiled suet pudding '. Outraged, Rothenstein, who was already interested in Mughal painting, founded, together with Havell, in 1910, an India Society to educate the British public about Indian arts. In the winter of 1910–11 he went to India with the painter Christiana Herringham, who had been copying the rapidly deteriorating Buddhist wall-paintings in the Ajanta caves in central India. In Calcutta he met the Bengali poet Rabindranath Tagore, whom he introduced to literary and artistic circles in London in 1912. Rothenstein was instrumental in the publication by the India Society of translations of Tagore's Bengali lyrics Gitanjali (Song-Offerings), for which he was awarded the Nobel prize for literature in 1913." (from the Oxford Dictionary of National Biography)