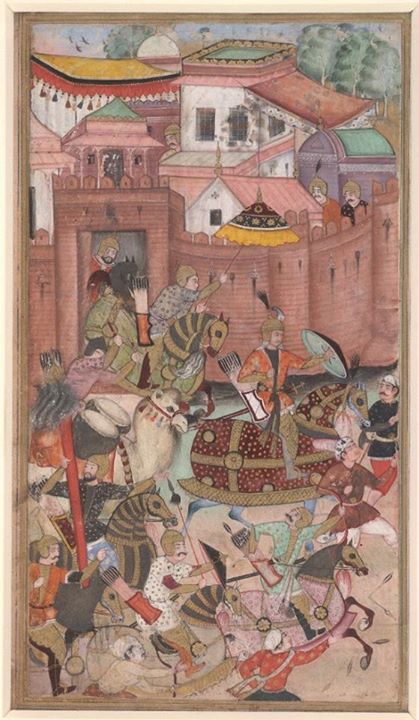 Video:
THE SWORD AND THE FLUTE

An innovative approach to storytelling combining the static character of Indian miniature paintings and the kinetic properties of film, the 20-minute short film The Sword and the Flute (1959), written, directed and produced by James Ivory, tells the story of medieval India through its artwork. By panning across the picture plane and then highlighting key details, the film animates the paintings.

The Sword and the Flute begins with the Moghul invasion in the late 15th century led by Emperor Akbar the Great. A progressive and enlightened ruler, Akbar defied Islamic law forbidding image-making. Considered a proponent of economic and cultural progress Akbar was also a friend to the arts who fostered the creation of miniature paintings. Paintings of the time commemorated both the arrival of Akbar and his soldiers on armored horseback and the surrender of the defeated forces. Following the shift in power, there is a reestablishment of the status quo. The tranquil life resumes as the various regions of India are united, a newfound peace depicted in paintings filled with bucolic scenes of people and animals reveling in the lush green landscape. As the film's dulcet-voiced narrator Saeed Jaffrey intones, "the peace which he brought to the people was not based on oppression but on tolerance and sympathy." With time the paintings began to document the arrival of Emperor Akbar's child and the ascension of his son, the prince Shahzade Akbar who like his father was interested in painting, the arts and scholarship.

But The Sword and the Flute is not simply a re-telling of history via these paintings. The documentary is also a history of miniature painting and an art history analysis of the imagery and meaning in the paintings themselves. For instance, narrator Jaffrey details the skewed sexual politics depicted in the paintings, such as the heroism of the men and the presumed passivity of the women. The paintings show a lack of interest in women beyond "an ideal of romantic grace and beauty," says Jaffrey.

Also a deconstruction of these art works and a celebration of their charms, The Sword and the Flute discusses the division in Indian miniature paintings between the Moghul (Muslim) style and the Rajput (Hindu) style. The Moghul paintings were concerned with the court and with historical events while the Rajput paintings emphasize otherworldly concerns and a desire for transcendence. As shown onscreen, the paintings beautifully document events from fireworks against the black sky, to court gatherings, pastoral hunting parties, religious worship and romantic scenes of lovers engaged in "their trance of self-absorption." The Sword and the Flute shows that central to many of the paintings were scenes of romantic love and courtship that served as allegories for spiritual states. The human passion depicted in the paintings, says narrator Saeed Jaffrey, was "an allegory of divine love."

James Ivory's passion for Indian culture not only informs The Sword and the Flute but eventually attracted the attention of Ismail Merchant who would go on to become Ivory's creative collaborator and life partner.

The film was Ivory's second documentary following Venice: Themes and Variations (1957), a meditation on the past and present of that famously atmospheric city. Venice: Themes and Variations was also Ivory's thesis film for his degree in cinema at the University of Southern California School of Cinematic Arts. The New York Times called Venice one of the top non-theatrical films of 1957.

Like Ivory, Mindaugis Bagdon, the cinematographer of The Sword and the Flute, was also a USC student. Ivory went on to use the same techniques again when he made the TV feature set against the backdrop of Indian paintings and the art world, Hullabaloo Over Georgie and Bonnie's Pictures (1978). The paintings themselves were culled from The Museum of Fine Arts in Boston, The Freer Gallery in Washington DC, the Metropolitan Museum of Art and a host of private collections.


Image:
Painting, detached from album. Babur and his army emerge from the Khwaja Didar Fort, from a Baburnama manuscript. Babur is shown riding a fully armoured horse, emerging with his cavalry from the Khwaja Didar fort, where he wintered in 1497. A drummer rides a camel behind him and another soldier leans forward to hold a parasol over Babur's head. The broken arrows in the left foreground indicate that the battle with Shaybani Khan the Uzbek has already begun. The fort is ringed with red brick walls and crenellated battlements. Inside a tomb with a vaulted roof, various buildings, pavilions and canopies are visible.

Thanks to the ever-resourceful Ratnesh Mathur for suggesting this video.

They went on to star a production unit called merchant ivory productions.... made feature films with english actors on indian culture.... like shakespeare wallah etc

True. Fiction tells tales better than facts. Was revisiting a DVD of the superb "Hullabaloo over georgie & bonnie's pictures" yesterday, after attending a talk by a slightly inebriated British library curator (in Delhi, for the IGNCA's " The Mughals" facsimile exhibition from British Museum) , who reminded me of an art collector character in Hullabaloo. This docu film comes along as a freebie on the DVD in India (Flipkartable). Hullabaloo captures the Indian art buying/selling scene beautifully, especially the 50s to 80s era when US & European auction houses regularly sent their bounty hunters to the struggling maharajas.On the European art/auction scene, dont miss this new film " the best offer" by the director of Cinema Paradiso ( http://www.hollywoodreporter.com/review/best-offer-film-review-408942 )