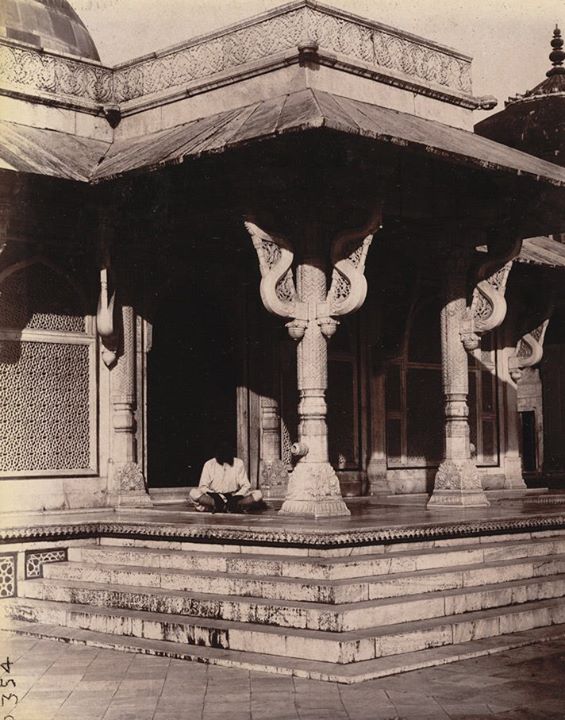 Close view from the south-west of the porch of Shaikh Salim Chishti's Tomb, Fatehpur Sikri - 1892

Photograph of Shaikh Salim Chisti's tomb at Fatehpur Sikri, from the Archaeological Survey of India Collections, taken by Edmund William Smith in 1893. The palace-city complex at Fatehpur Sikri was built by the Mughal Emperor Akbar (r.1556-1605). Akbar built his city close to the saint Shaikh Salim Chisti's refuge, after the saint had successfully predicted the birth of the Emperor's heir, Prince Salim, later Emperor Jahangir. The Saint's white marble tomb is situated in the courtyard of the Jami Masjid. This is a view of the tomb's porch showing the finely carved serpentine brackets under the eaves.

The Hindu influence is visible in the use of eaves, pillars, porches, jali work etc.

This is indo-sarcenic style which is a combination of hindu and islamic style of architecture..it has frontal facade,illustrative wall carvings,monolith pillars etc like hindu temples while it also has the prominent minarets,embroidered complex sculptural murals followed by windows with that prominent designer style that allows air to pass thru them