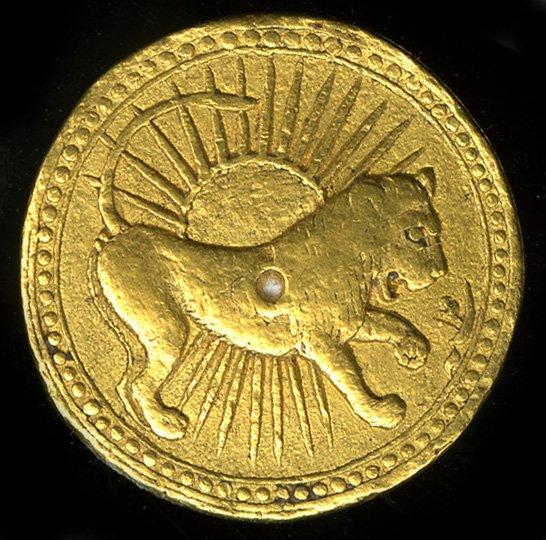 The Persian couplet on the obverse (front) of this coin might be not mean much to most, but look closely at the friendly-looking lion and he can tell you something about this coin without you needing to learn Persian. The sun behind him shows he is Leo from the Zodiac: he tells us that the coin was made in the time of year when people with the star sign of Leo are born. He also reminds us that the symbols of the Zodiac - an everyday sight to us as we scan our horoscopes today -were also meaningful shorthand for people in medieval India, the generation before the Taj Mahal was built.

The Mughals: warriors and artists

To a reader of Persian the obverse of this coin can tell more: it declares who made it, where and when. It reads:

The Mughals, who first invaded India in 1525 were a Muslim people descended from Ghengiz Khan. During the fifty-year rule of Akbar, Jahangir's father, who he proudly emphasises on this coin, they created a vast empire which stretched across the Indian sub-continent as far to the west as Afghanistan, and as far south as the Godavari river. The Mughals, despite being continually involved in military campaigns to expand and protect their empire, also created a courtly culture where art, literature, science and architecture flourished. This extended to beautiful and innovative coin design.