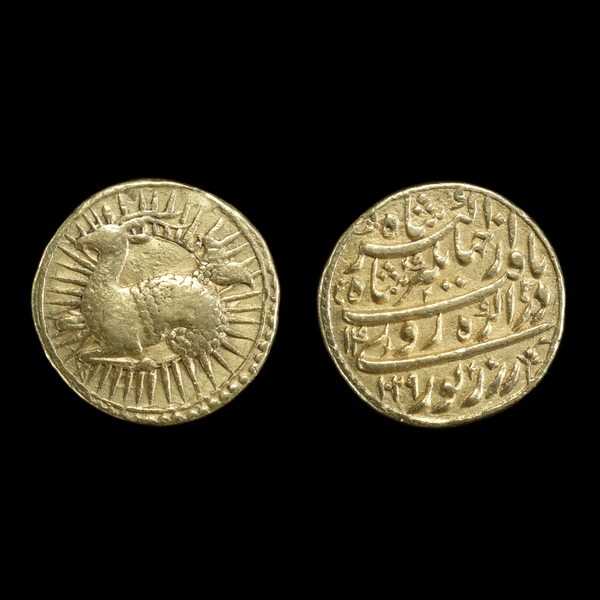 Signs of the zodiac, a sign of the times

In 1584, the Mughal emperor of India, Akbar (1556-1605), established a new religion, Din-i Ilahi ('Divine Faith') and a corresponding new era, the Ilahi era, based on solar years. The reign years of Akbar's son, Jahangir (1605-28) were initially also reckoned in the Ilahi era. Solar months are conventionally represented by the twelve zodiac signs, which Jahangir used on a series of coins.

Jahangir recorded his thoughts about these coins in his diary on 20 March 1619:

'Previously to this, the rule of the coinage was that on the face of the metal they stamped my name, and on the reverse the name of the place and the year of the reign. At this time it entered my mind that in place of the month they should substitute the figure of the constellation which belonged to that month ... in each month that was struck, the figure of the constellation was to be on one face, as if the sun was emerging from it.'

This coin was issued by Jahangir's central mint at Agra the following year, AH 1029 (AD 1619), and is also dated in the 14th year of his reign. It depicts Capricorn, a goat-like creature, which was equated with the Ilahi month, Di. The Persian inscription on the reverse is the same on all of Jahangir's zodiacal coins. It translates 'The surface of gold was decorated at Agra by Jahangir Shah, son of Akbar Shah'.

Many still around in India I have seen a complete set with a collector.

And they are WIDELY faked, some very good.