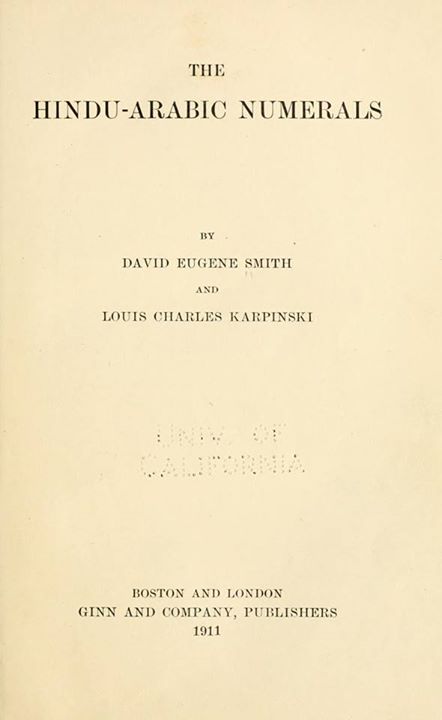 EARLY IDEAS OF THEIR ORIGIN

It has long been recognized that the common numerals used in daily life are of comparatively recent origin. The number of systems of notation employed before the Christian era wag about the same as the number of written languages, and in some cases a single language had several systems. The Egyptians, for example, had three systems of writing, with a numerical notation for each; the Greeks had two well-defined sets of numerals, and the Roman symbols for number changed more or less from century to century. Even to-day the number of methods of expressing numerical concepts is much greater than one would believe before making a study of the subject, for the idea that our common numerals are universal is far from being correct. It will be well, then, to think of the numerals that we still commonly call Arabic, as only one of many systems in use just before the Christian era. As it then existed the system was no better than many others, it was of late origin, it contained no zero, it was cumbersome and little used, and it bad no particular promise. Not until centuries later did the system have any standing in the world of business and science ; and had the place value which now characterizes it, and which requires a zero, been worked out in Greece, we might have been using Greek numerals to-day instead of the ones with which we are familiar.

Of the first number forms that the world used this is not the place to speak. Many of them are interesting, but none had much scientific value. In Europe the invention of notation was generally assigned to the eastern shores of the Mediterranean until the critical period of about a century ago, sometimes to the Hebrews, some times to the Egyptians, but more often to the early trading Phoenicians.

The idea that our common numerals are Arabic in origin is not an old one. The mediaeval and Renaissance writers generally recognized them as Indian, and many of them expressly stated that they were of Hindu origin.