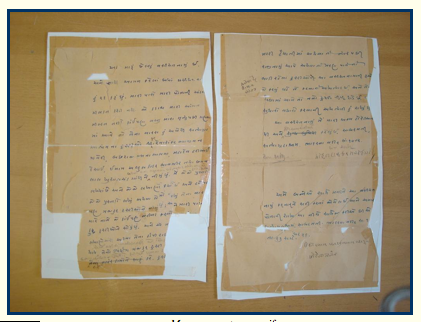 India – M K Gandhi – father of the Indian nation highly important document dated ‘Asho sudi 4 Vikram Samvat 1982’ (September 23rd 1926 on the Gregorian calendar) being the will of M K Gandhi written at the Satyagrah Ashram Sabarmati Bhadarva in his native Gujerati with translation. This highly important document supersedes the Will dated 1921 which was sold in these rooms on May 21st this year and provides an historic insight into Gandhi’s thinking and his speculations for the future some five years on from his previous will. The witnesses to the document are Kishorelal Gahanshyamlal Mashruwala and Chhotelal Jain. This document has come to us from the same source as the previous will of 1921 and according to a note from our vendor the present document was drawn up as an initial draft which was then the subject of considerable consultation by Gandhi’s circle. This led to several corrections which appear on the document in Gandhi’s hand with attestation by witnesses. The text of the document sets aside all previous wills and then adds characteristically: ‘I don’t have any property of my own. If anything is considered as my personal property after my death then from here I nominate the following persons as its heir...’ he then lists five people. ‘For all the books and writings written by me and all the books and writings I may write further I consider the above mentioned trustees as their heir. I also handover all the administrative powers following my death to the above mentioned trustees and the earnings from all my writings books or their copyrights and from anything that is considered as my personal property should be used for the development of the Satyagrahashram by the trustees during that time accordingly. Out of all these trustees if anybody resigns or dies during my presence the remaining trustees have authority to behave as per this will and they can even appoint a new trustee. I also have authority to correct them. This will is written and designed by me in my complete sense and understanding...’ - Mullock's Auctions