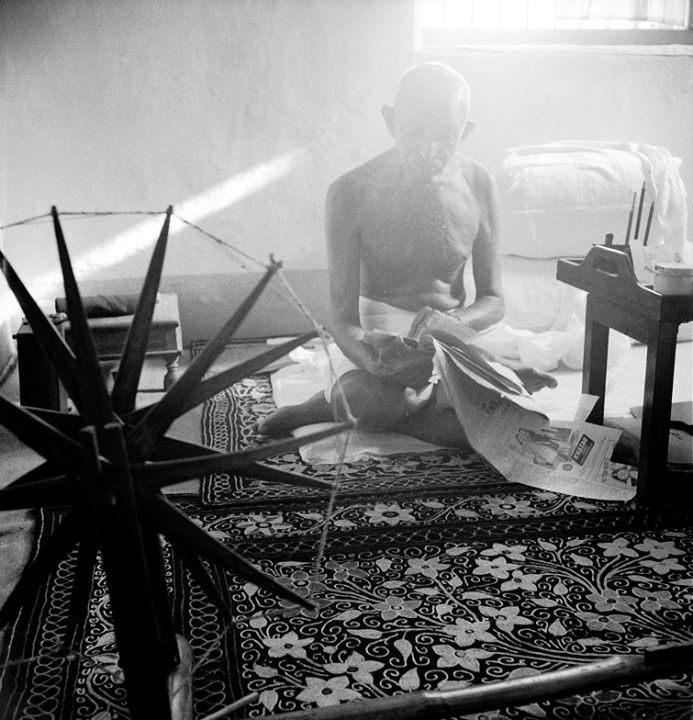 In 1946, Mohandas Gandhi sits next to a spinning wheel (Charkha), a device used to make yarn or thread; the now-famous image came to symbolize the notion of Indian self-sufficiency — and thus independence from British rule.

Photographed by Margaret BourkeWhite Collarn a unique, celebrated career spanning decades, LIFE photographer Margaret Bourke-White fearlessly documented countless facets of the human experience, from the aspirational (the building of Montana’s monumental Fort Peck Dam) to the utterly barbaric (the liberation of Nazi concentration camps at the end of World War II). Her trailblazing assignments, for LIFE and as a freelancer, ranged from stories about the Soviet Union in the late 1920s to a riveting feature on segregation in the American South in the 1950s. She was the first woman photographer to fly on bombing runs into Germany during World War II. And on and on and on.

Bourke-White was also, it turns out, a friend to — as well as a close chronicler of the extraordinary life of – Mohandas Karamchand Gandhi; in fact, she was the last person to interview him hours before his assassination in January 1948. It’s hardly surprising, really, that Bourke-White would be drawn to a figure like Gandhi. After all, for her entire career, she focused her lens on the human side of any issue — no matter how brutal or unsettling the subject matter — and Gandhi’s emphasis on liberty and dignity in the face of savage resistance spoke directly to her own passion for both justice and for adventure.