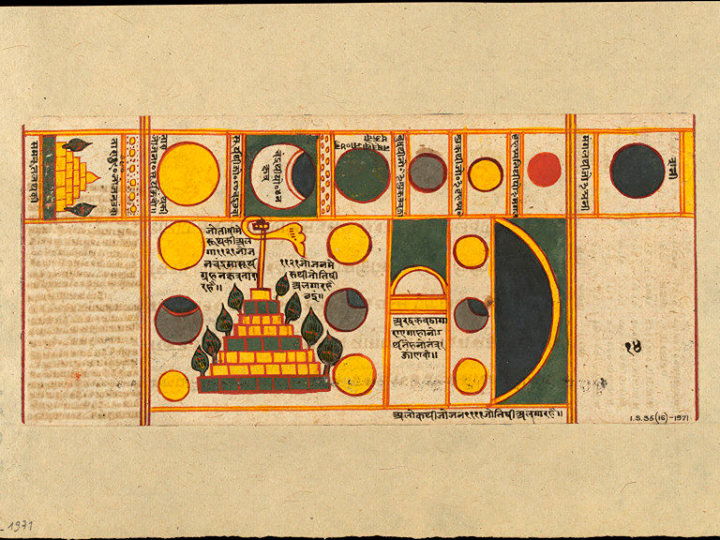 The Sangrahanisutra is a cosmological text composed in 1136 by Shrichandra that includes Jain ideas about the structure of the universe and the mapping of space. The manuscript, made in the eighteenth century, includes illustrations and cosmic diagrams.

The verso shows planetary bodies and the distances between them. At the top, from right to left, Saturn(?), Mars, Jupiter, Venus, Mercury, the moon, the sun and stars can be seen.

Page verso, ink and paint on paper, from a complete illustrated manuscript of the Samgrahanisutra or Sangrahanisutra, a Jain cosmographical text in Sanskrit composed in A.D.1136 by Shrichandra Muni, whose name appears on f.52 of this copy. The work is also named at the end as the Trailokya dipi, which is more usually applied to the Sangrahani Sutra of Jinabhadragani Kshamashramana, the earliest work of this class. The work is accompanied by an interlinear text in smaller devanagari script, which is possibly the commentary of Devabhadra. This manuscript is written on 56 oblong folios of paper of which two folios (10a and 12a) are not numbered, the last numbered folio being 54. The outer folios are of double thickness and decorated with a central ogee medallion and floral motifs on their outer faces. The copy is undated but appears to have been written and illustrated in Western India during the 18th century. This folio (16) verso is illustrated with diagrams of the positions of celestial bodies.

Indian/Jain/Vedic/Buddhist cosmology is a fascinating subject. This Jain/Jina/Gyan free online library has much to offer ( http://www.jainuniversity.org/library.aspx )