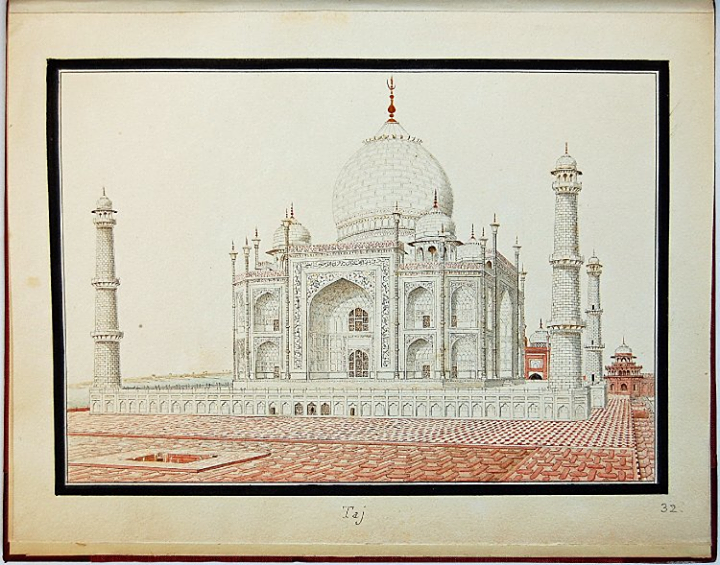 Watercolour painting on paper, of the Taj Mahal. The painting shows the Taj Mahal to the east when standing in front of the mosque. In the far distance on the left hand side of the painting is the Yamuna River and behind the Taj Mahal, the 'jawab' or guest house is just visible. The focus of the painting is the mausoleum itself, raised up on its white marble plinth with three of the four minarets shown. A large arch surrounding two sets of windows covered in lattice work is decorated with inlaid precious and semi-precious stones, creating floral patterns and inscriptions. Flanking the arch are niches which are also decorated with inlaid floral patterns. The mausoleum is crowned with a bulbous white dome on a high neck, faced with white marble and flanked by four domed kiosks, two of which are visible. The floor below the plinth, on the same level as the mosque is decorated in geometric patterns created by alternating white marble and red sandstone. A square fountain is also visible in the foreground. The painting is framed by a thick black line.

Possibly the only picture of the Taj that I have seen where only three Minars are clearly visible.

Once in an age or two humans build just right, just right!!

So beautifulllll thank you, very much!